US scientists have discovered how to glue two materials together with a one nanometre-high layer of polymer chains.

Ganapathiraman Ramanath, of Rensselaer Polytechnic Institute, New York, who led the research, hopes his thin but strong nanoglue will be a useful adhesive in computer chips and other materials devices where thicker layers wouldn’t fit. The glue withstands temperatures up to 700?C (indeed, it gets even stickier as temperatures rise), so could be used to hold paints and coatings on to hot surfaces, like the inside of jet engines, said Ramanath.

The polymer chains Ramanath’s team used are commercially available and cheap (about $35 for 100 grams). Though their backbones are carbon-based, the ends are modified with other elements, like sulfur, so they form bonds with materials such as copper. 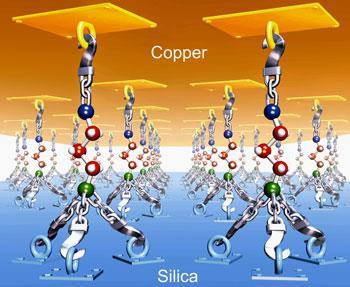 Usually, such polymers would self-assemble to form a small forest of chains standing on a copper surface; heating the forest up breaks sulfur-copper attractions and the polymers fall off again.

But the Rensselaer team covered the polymers with a silica layer, to form a copper-polymer-silica sandwich. Though the chains didn’t stick to the silica at room temperature, they didn’t degrade when exposed to high temperatures either: sulfur-copper bonds which broke quickly reformed as the polymers could not break free from the middle of the sandwich.

Instead, as temperatures reached 400?C, the silica-facing ends of the polymer chains, which had been customized with hydroxyl (OH) functional groups, began to form hydrogen bonds and siloxane bridges (Si-O-Si) with the silica. The attachment strengthened as temperatures rose, and the silica and copper stayed glued together after the system was cooled down.

Polymers have been used before to stick surfaces together, but the chains have always been much longer, effectively making the glue much thicker. And bonds are usually created by chemical reagents, or by treating surfaces with plasmas, said Ramanath: the heating effect was surprising. His team is in the process of filing a patent for the work.

Reversible glue ’de-bonds’ at the touch of a button

Magnetic glue can be switched on and off.

Researchers in the US have attempted to surpass nature and create a synthetic material that sticks to surfaces at the nanometre level.