Nanorobots powered from beneath the skin

Science fiction comes to life with the latest nanodevice that sits underneath the skin and converts near-infrared (NIR) light energy into electrical power. This is a promising wireless electrical power source for biological nanorobots for use within the human body, say scientists in Taiwan.

The nanodevice is an organic photovoltaic device (OPV) designed by Fang-Chung Chen and his team from National Chiao Tung University, in Hsinchu. OPVs are more commonly known for their applications in solar cell technology converting sunlight into electricity.

Here, Chen has developed an OPV device that uses NIR light, enabling the energy conversion to occur underneath the skins surface as biological tissues are highly transparent to NIR light. Made up of several layers; including indium tin oxide (ITO)-coated glass, anodic buffer, polymer/fullerene-mixed layer and calcium/aluminium cathode, the device is small, the shape of a fibre, and is ideal for a biological environment. 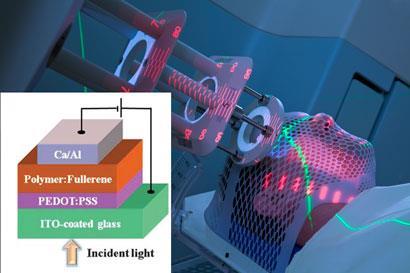 The device, the size of a fibre, converts NIR radiation from a laser into electrical power

To test their theory, Chen’s team covered the OPV device with a 3mm layer of porcine skin and fired a NIR laser on it at the maximum threshold tolerated by human skin. The team measured the OPV electrical output as 0.32?W, which is more than enough to drive many biological nanodevices at the same time - the typical power needed for one nanodevice is approximately 10nW.

Yang Yang, Director of the Nano Renewable Energy Center, at the University of California, Los Angeles in the US, says: ’This is a very interesting and smart design, which will be potentially important and useful for medical applications.   Chen has created a new direction for OPVs.’

’In addition to tissue repair or medical target identification, this OPV device could act as an energy source to trigger biomedical functions of the nanorobots, or more straightforward applications in neurostimulation,’ Chen tells Chemistry World. ’Imagine that, with this approach, we might be able to use optical methods, non-intrusively, to trigger the electrical stimulation deep inside the body to inhibit pain or to control the disease directly,’ he adds.