Scientists at the Massachusetts Institute of Technology (MIT) in the US have designed a device able to accurately weigh single nanoparticles within a liquid.

The new technique is based on the ultra-sensitive mass detection made possible by nanomechanical resonators, which vibrate a sample on a cantilever and use its resonance as a measure of its mass. The cantilever acts like a tiny diving board for the sample - its weight can be gauged by the up and down movement of the board.

Particles as miniscule as 7 zeptograms (10-21g) in mass have previously been accurately weighed with using this method. But in order for the measurement to be precise, samples must be weighed within a vacuum. Biological and environmental samples, often contained within fluid, have previously hampered researchers, as the viscosity of the fluid disrupts the resonance and therefore the sensitivity.

Scott Manalis from MIT and his colleagues have managed to overcome this stumbling block remarkably simply. Instead of putting the resonator inside the fluid, they have put the fluid inside the resonator.

The team’s new microresonator has a microfluidic channel that passes through the cantilever of the resonator. It is able to measure the mass of the particles inside to within one femtogram (one thousandth of a millionth of a millionth or 10-15 of a gram). 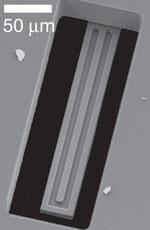 The researchers achieved this level of resolution by shrinking the wall of the channel to the micrometre scale and packaging the cantilever within a vacuum. Demonstrating their microfluidic device, the team accurately weighed nanoparticles and single bacterial cells in fluid. Their work is published this week in Nature.

They hope to develop this work to not just weigh but distinguish single bacterial cells and particles. ’At this point, the method distinguishes different molecules by their affinity to certain antibodies, which are immobilised on the sensor’s surface,’ Manalis told Chemistry World.  ’But one of our future goals is to demonstrate mass-based flow cytometry.’

The device can be produced at low cost and could provide a much needed medical tool in poorer countries. ’CD4 cells, routinely counted to monitor AIDS, could be labelled with nanoparticles to distinguish them from other cells in a blood sample,’ the researchers suggested. ; This could be a cheap solution in developing countries where flow cytometry is not available or is too expensive.’