US researchers have created tiny oxygen-sensing devices made from carbon nanotubes. They say the devices demonstrate the potential application of nanotechnology in low power, wearable gas sensors and could benefit those working in confined spaces where monitoring of oxygen concentrations is essential for survival.

Researchers at the University of Pittsburgh and the National Energy Technology Laboratory in Pennsylvania endowed nanotube networks with oxygen-sensing capabilities by ’decorating’ them with europium-containing complexes - dendrimers containing Eu3+ cations. Each of the team’s devices is smaller than 7cm2 and can sense oxygen concentrations in the range 5-27 per cent. 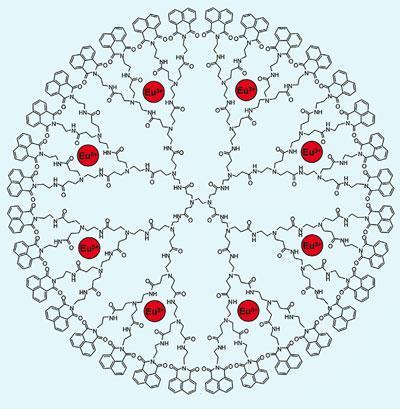 Structure of the europium-containing dendrimer complex

’Although carbon nanotubes are not sensitive to many gases, they become sensitive once you decorate them or functionalise them with other moieties,’ explains Alexander Star, who worked on the project. ’This work is one example - when you add an oxygen sensitive moiety you make an oxygen sensor. So in a sense, carbon nanotubes can live up to their potential and become very great sensor platforms.’

When europium is exposed to oxygen in solution its fluorescence changes in a way that can be measured using optical spectroscopy. But the researchers realised that solid-state europium also became sensitive to oxygen after extended exposure to UV light. Combining the rare metal with nanotubes allowed them to make devices that could measure not only fluorescence, but also changes in electrical conductivity as the nanotubes were able to transduce electronic changes in the overlying layer of europium prompted by the presence of oxygen. Star says this dual approach makes them better sensors because it avoids false positives when testing for oxygen.

Junhong Chen, who studies nanostructured gas sensors at the University of Wisconsin-Milwaukee in Wisconsin, says the discovery that solid-state europium can be made oxygen sensitive is important in itself. ’And the authors have devised a clever way to amplify this effect,’ he adds.

Because the team’s sensors are dependent on light, commercial devices would, like existing fluorescence-based devices, require a compact source of UV. This could easily be provided in the form of small LED lamps or fibre-optics, says Star. But he thinks nanotube sensors could prove more practical than current sensors. ’They are probably small enough to operate from a watch battery, so I think the applications should be in wearable sensors,’ he says. ’And because they detect oxygen at ambient conditions, they could be very appropriate for personal safety devices, so for workers in confined spaces such as mines, submarines, and space shuttles.’

Chen agrees that the ability to sense oxygen at room temperature is key, but he thinks cost could be a problem. Star argues that the amount of each material needed to make their devices is so small that cost will not be an issue.