Nanotubes to soak up oil spills

Chinese chemists have made sturdy nanotube sponges that can selectively absorb oil and volatile chemicals in preference to water. The sponges float on water and can absorb up almost 180 times their own weight in oil, giving them great potential for mopping up industrial spillages.

’We are very excited about the potential of our material,’ says Anyuan Cao, who led the work at Peking University, Beijing, China. ’The sponges can absorb a variety of oils - from volatile solvents to thick and sticky oil - but they are also elastic and robust. They can be wrung out like towels and re-used, and are stable to harsh environments like sea water or high temperature.’

A typical goal of nanotube production is to create linear arrays, but Cao’s team chose to produce tubes that were as long as possible, but in a disordered arrangement. The team used a chemical vapour deposition (CVD) process to make an amorphous mix of multi-walled nanotubes hundreds of micrometres long. The resulting material has extremely low density, as the nanotubes are arranged like a series of matchsticks dropped on top of each other, which creates large empty pores.

Illustration and cross-sectional SEM image of the sponge structure

This structure lets the tubes slide over one another, allowing the material to flex and compress before springing back into its original shape. To prepare the sponges to absorb liquids, the team soaked them in ethanol and slowly squeezed them dry, creating ’densified’ black pellets around 20 times smaller. When these pellets are exposed to oils, they quickly recover their original dimensions as the liquids fill the gaps between the tubes.

Using nanotubes does not make the process prohibitively expensive for large-scale use, Cao says. ’The cost to make centimetre-scale sponges should be negligible,’ he tells Chemistry World. ’The equipment to produce them could be easily scaled up for large-scale production, and of course they can be re-used thousands of times.’

’This material is essentially a nanotube aerogel with a very low density - although it is not brittle like other aerogels,’ says Ian Kinloch, a nanotube expert at the University of Manchester, UK. ’Although similar materials have been made from nanotubes before, this is the first time they have been used as a sponge, and they certainly meet all the criteria.’ 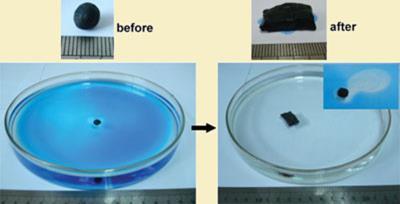 Nanotube sponge cleaning up a diesel oil film on water, and swelling to accommodate the absorbed oil

But absorption is not the only thing this material could be useful for, and there are many promising uses beyond oil spill recovery, Kinloch notes. One example is stretching it into high-performance fibres or sheets for use in filtration systems, thermal insulation or noise-absorption. Since nanotubes are good conductors of electricity, there are also many applications in electronics.

’In future, one possibility is functionalising the surface of the nanotubes to make them more selective. This way, they might be fine-tuned to absorb only a specific oil or solvent,’ Kinloch suggests.