Researchers in the US and Japan have created a nanoscopic ’torch’ that shines visible laser light on nanoscale structures, imaging them with high resolution. The system could be developed into a type of microscope for biological applications, suggest the researchers, and might form the basis of a new way to store and process information. 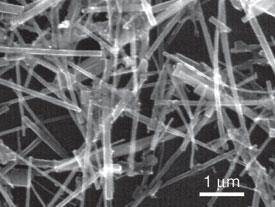 Peidong Yang from the Lawrence Berkeley National Laboratory in California and colleagues made nanowires from potassium niobate, KNbO3, which is known to have unusual ’non-linear’ optical properties. A single wire, around 100nm across and a few micrometres long, was suspended in an aqueous solution and held in place by beams of infrared laser light acting as optical tweezers.

Because of its non-linear optical properties the crystalline nanowire is able to convert the infrared laser light from one frequency to another, making the system tunable - an important property for a range of applications. The researchers showed that the light of modified frequency emerged from the end of the nanowire - similar to a beam of light coming from a torch. They scanned this ’nanotorch’ over an object and collected the resulting image in a charge-coupled device, demonstrating that it could distinguish structures of the dimensions of a few tens of nanometres.

Reporting their findings in Nature, the researchers say: ’We use this tunable nanometric light source to implement a novel form of subwavelength microscopy in which an infrared laser is used to optically trap and scan a nanowire over a sample, suggesting a wide range of potential applications in physics, chemistry, materials science and biology.’

Rob Eason, of the Optoelectronics Research Centre at the University of Southampton, UK, was impressed by the research. ’The combination of these separate topic areas - growth and characterisation of nonlinear nanowires, optical tweezing, parametric frequency conversion, scanning near field microscopy, and subwavelength measurement - represents some kind of hero experiment,’ Eason told Chemistry World. ’Individually each of these topics is a subject in itself, and so in combination is a tour-de-force in my view.’

However, Eason was less convinced about the claimed potential applications of the research. ’Whether this is set to become a ’routine’ application technology as they advertise for all of the physical sciences is, in my view, dubious,’ he said.