Researchers in the UK have observed a new crystal form of maleic acid for the first time.

Researchers in the UK have observed a new crystal form of maleic acid for the first time. 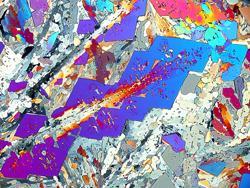 William Jones and colleagues obtained a second crystal form, or polymorph, of maleic acid in their Cambridge laboratory 124 years after the first crystal structure of this substance was reported.

The researchers, working at the University of Cambridge and the Cambridge Crystallographic Data Centre, made this discovery while examining a series of pharmaceutical molecules.

Maleic acid is used extensively in the pharmaceutical industry for making maleate salts of drugs. Polymorphism is of crucial importance in drug preparation as different crystal structures of the same material offer markedly different physicochemical properties.

In a related study Jones’ group have also come up with a simple method to reveal the maximum number of salt forms of a given pharmaceutical compound. Rather than use the current expensive high-throughput robotics methods, they have shown that salt screening can be carried out using a mechanochemical alternative - solvent-drop grinding. This involves milling the drug together with a potential salt forming substance in the presence of a small quantity of solvent, to uncover the possibility of crystalline salt formation. For drugs used in their study, their technique showed 100 per cent efficiency.