A new type of drug that can block the switching on of certain genes in cancer cells has shown promise in mice. Researchers say their drug design strategy could be employed against other targets previously considered ’undruggable’.

Developed by a US team led by Greg Verdine at Harvard University and James Bradner at the Broad Institute of Harvard   and MIT, SAHM1 targets a signalling pathway called Notch, known to be active in various cancers. It works by preventing the assembly of the complex needed to activate Notch genes - the Notch transcription factor complex.

’There are 60 or so transcription factors that bind small molecules, but the vast majority don’t and those have been completely undruggable,’ says Verdine. ’So this is the first drug that directly targets the Notch complex and, I’m pretty sure, the first example of a potent, direct acting inhibitor of any transcription factor that doesn’t already bind a small molecule.’

Transcription factors are notoriously difficult to target, but Verdine’s lab decided to try with ’stapled peptides’ - helical molecules with hydrocarbon crosslinks - that they had previously used against proteins involved in cell death. They designed SAHM1 to nestle right into the groove where the final piece of the Notch complex should fit, using the missing piece, a co-activator protein called MAML1, to derive their design. The drug showed impressive results, significantly reducing expression of Notch genes in cells and slowing disease progression in a mouse model of leukaemia. 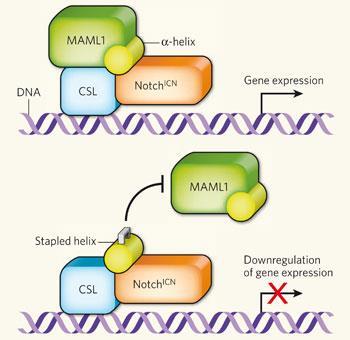 SAHM1 slots in where the MAML1 protein should be, inhibiting the Notch signalling pathway

The really distinctive aspect of this new class of drug, says Verdine, is its remarkable ability to penetrate cells. Despite being much larger than most small molecule drugs, SAHM1 can still get into cells, unlike a biological drug. The peptides are taken up by an active transport mechanism into compartments called endosomes, from which they can reach their target.

Ajay Chitnis, who works on Notch signalling at the National Institutes of Health in Bethesda in the US, says one advantage of Verdine’s stapled peptides is that they target the very last step before the Notch genes are turned on, meaning they are unlikely to interfere with other cell processes. But he says what’s most exciting is their tremendous potential as therapeutic agents more broadly. ’Stapled peptides are amazing inventions,’ he says. ’The current study is proof of principle for how this elegant new technology can be harnessed.’

Many transcription factors interact with helical motifs and, in unpublished research, Verdine’s team is already working on other examples. ’We’re optimistic that it’s going to have generality that goes beyond this single example of Notch,’ he says.