Cyclometalated complexes could improve the stability of dye-sensitised solar cells

A new type of dye could improve the lifespan of dye-sensitised solar cells - low-cost photovoltaic cells that can convert sunlight into electricity and thought to be some of the most promising for widespread use.  Designed by Swiss and Japanese researchers, the dye has a light to electric conversion efficiency of 10.1 per cent, making it competitive with the best available.

Dye-sensitised solar cells (DSSCs) use dyes to capture energy from sunlight and convert it into electric current. Standard devices contain the ruthenium-based dye N719, which is considered one of the most efficient. But the lifespan of N719, and therefore most DSSCs, is limited by thiocyanate (SCN) ligands that reduce the chemical stability of the dye.

Now a team led by the inventor of the DSSC, Michael Gr?tzel, at the Swiss Federal Institute of Technology, has designed a new dye that potentially solves this stability problem. ’We have for the first time successfully replaced the thiocyanate groups with something else that forms a strong chemical bond with the ruthenium and can give high efficiency,’ says Gr?tzel.

In the old dye design, the ruthenium is bonded to two carboxylated bipyridines and two thiocyanate ligands. But in the new design, the thiocyanates are replaced with a single cyclometalated ligand that forms two bonds with the ruthenium. Two fluorine atoms help fine tune the redox potential of the complex, ensuring it does not become too strong an electron donor - in order to regenerate, the dye molecule must be able to regain the electron its loses when it is struck by light. 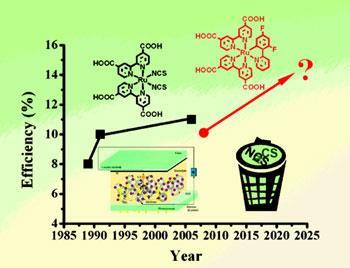 ’It’s true that the thiocyanate groups are thought to be the least stable element of the current dye and so it’s reasonable to argue without those the dye is likely to be more stable,’ says James Durrant, a photovoltaics expert at Imperial College London. ’But there’s no stability data in the paper, which isn’t surprising - most people avoid doing stability trials until a long way down the line, because they’re so painful.’

Gr?tzel, however, is keen to optimise the efficiency of his design before going to the next stage. The target is the 11.1 per cent achieved by the best performing ruthenium molecules, which have thiocyanate ligands. ’We need to put more time into the molecular engineering,’ says Gr?tzel. ’A really long stability test should last for 8,000 hours and you want to do that once you’ve gone through the initial screening and identified the champion ligand.’

Durrant warns there have been many reports of better dyes that haven’t necessarily translated to practical devices. ’At first sight they appear to be a significant improvement on the state-of-the-art, but when it comes down to the actual implementation, virtually none have proved to be better,’ he says.