Further evidence for the asbestos-like effects of carbon nanotubes has emerged from a new study in mice. The study shows for the first time that the tubes reach the outer lining of the lung when inhaled - as asbestos does. But researchers say the results should be interpreted with caution.

Carbon nanotubes, like asbestos, have high aspect ratios; in other words, they are long and thin, meaning they have the potential to get stuck when trying to cross the two layered membrane - the pleura - separating the lung from the chest wall. In the case of asbestos, fibres can dwell in this area, causing lung disease and mesothelioma, a type of slow-growing cancer.

’We’re not saying that carbon nanotubes are going to be like asbestos. We don’t know yet,’ says James Bonner of North Carolina State University in the US, who led the research. ’There’s no evidence of cancer. The major finding is that we’re saying that nanotubes get to the site where mesothelioma would occur, but we don’t have the information to say that it does occur.’

Last year, concerns were raised for the safety of those working with nanotubes when a paper published in Nature Nanotechnology concluded that nanotubes could damage lung tissue if injected into the abdomen of mice.1 The study by Bonner and colleagues now provides an insight into potential effects of exposure in the ’real world’ by examining what happens when the tubes are inhaled.2 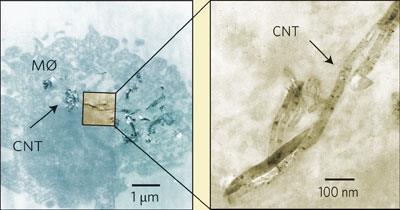 The timescale (14 weeks) of Bonner’s experiment was not long enough to test whether inhaled nanotubes cause mesothelioma, but the team did see damage in the form of fibrosis - scarring of the pleura - which is also seen with asbestos. Mice that inhaled multi-walled carbon nanotubes developed fibrosis after around two weeks, with the nanotubes accumulating in immune cells in the region just below the pleura. By comparison, mice inhaling carbon black nanoparticles, which do not have the crucial high aspect ratio, did not develop fibrosis.

Ken Donaldson of the University of Edinburgh, one of the authors of the 2008 paper, stresses the importance of distinguishing between different types of nanotubes. ’My guess would be that the smallest ones are the least likely to cause much in the way of disease and that the longest ones would be most likely to cause disease,’ he says. ’We’re not in any position to be able to say this study has generic significance for all other nanotubes, because they come in different lengths, compositions and contaminants.’

Bonner agrees, pointing out that the toxic effects could even be related to the nickel catalysts left over from nanotube growth - other manufacturing processes use different catalysts. He says further studies comparing the effects of nanotubes from different sources, of different sizes and at lower doses are required.

’This research contributes to the emerging evidence base on the inhalation toxicology of high aspect ratio nanoparticles,’ says Steve Hankin, a toxicologist with SAFENANO at the Institute of Occupational Medicine. Crucially, he notes, the link between toxicology and the risk posed by any substance is exposure - without exposure, the risk can be substantially minimised or even eliminated.