New form for an old fuel

Colloidal coal-water suspensions may rise to the challenges of clean coal technology with the help of a new production method.  At the very least, they won’t settle - thanks to new research led by Gustavo N??ez of Nano Dispersions Technology in Panama. 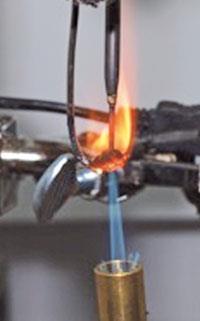 Combustion of a hanging drop of the colloidal coal suspension

Coal-water slurry fuels are currently burned in some industrial boilers, and are becoming increasingly economical to use as oil and gas prices continue to rise. But N??ez points out that there are practical difficulties involved in using slurries as the coal particles can form a sediment during storage or build up in equipment even as it is being used.  ’It was a nightmare to handle that,’ says N??ez, who along with his colleagues at the company have developed an energy efficient way to make colloidal coal.

Pulverising dry coal to this scale results in a cloud rather than a settled fuel, so it needs to be crushed in the presence of a liquid. ’Other mills also can decrease coal particles to several microns or even to 300 to 500 nanometres. However, the energy consumption is very, very high,’ says Longlian Cui, an expert in coal technologies from the China University of Mining and Technology.

To grind the wet coal more economically, N??ez’s team took advantage of forces that occur between a fluid and a wall. They spun a thin film of coal-water slurry on the inside of a cylinder, causing the water to separate from the coal particles somewhat.

The concentrated coal particles exerted shear forces on their neighbours, breaking one another down.

Over 65 per cent of the coal in the resulting fluid was below 20 microns in diameter, and due to Brownian motion, it did not settle. What’s more, scaling up the process for manufacturing colloidal coal seems straightforward, with an estimated cost of ?65 per tonne. Cui finds the innovation promising but warns that this high-wear process will require tough machinery, perhaps of tungsten carbide, and it may be difficult to keep the film of coal water slurry thin enough on a large scale.

But he believes the promise is worth pursuing. Beyond convenience, colloidal coal may help reduce emissions. Coal cleaning procedures, such as chemical washing, can remove polluting impurities and are more efficient when large surface areas are available.

Burned in an ordinary boiler with pollutant-removing additives, N??ez’s group has already demonstrated that using colloidal coal can decrease sulfur emissions. They are interested in further experiments to see whether carbon dioxide can be similarly removed during the burning process rather than in a separate carbon capture facility.

They also tried the colloidal coal as a reburn fuel in a General Electric test boiler furnace facility, finding that it reduced nitrogen oxide emissions - a cause of smog and acid rain - by up to 65 per cent. Its emission-reducing performance outstrips dry coal and, at higher temperatures, conventional slurries.