Molecular devices can be reconfigured simply by rearranging their component modules claims a team of chemists in Northern Ireland and France. 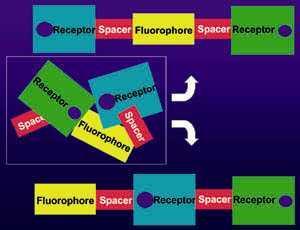 Mixing up the combination of fluorophore, spacers and receptors leads to different logic devices

A P de Silva, professor of organic chemistry at Queen’s University Belfast, and his co-workers, illustrate how these components (fluorophore, receptors, spacers) can be assembled in two different combinations to give two different logic devices. They show that their devices both work as AND logic gates using excitation light as the power supply. However, by significantly changing the concentrations of the ions one device can also function as a YES gate and the other as a PASS gate.

Luigi Fabbrizzi, professor of chemistry at the Universit? di Pavia in Italy, commenting on the work said that ’de Silva has demonstrated that the different arrangement of the same molecular pieces generates different logical functions. The experiment is convincing and very powerful from a didactic point of view’. As an added advantage to this system both devices can function in water without the need for organic solvents.

With an eye to the future, de Silva remarks that these results ’should enable [molecular systems to achieve more individual computational functions] by allowing easier reconfiguring, especially if the re-wiring of components can be achieved by non-covalent interactions as opposed to the covalent connections employed here’.