A new state-of-the-art facility in Germany will significantly boost Europe’s ability to identify and characterise minute traces of nuclear material as part of ongoing safeguarding and non-proliferation activities.

In an announcement made during the recent annual meeting of the American Association for the Advancement of Science in San Diego, the European Commission’s Joint Research Centre (JRC) has teamed up with the European Atomic Energy Community (Euratom) to establish a new laboratory in Karlsruhe which will house Europe’s only large geometry secondary ion mass spectrometer (LG-SIMS), a piece of kit that will vastly improve the speed and accuracy of nuclear material detection.

For the last decade or so, the JRC’s Institute for Transuranium Elements (ITU) has been using a standard SIMS technique to analyse samples taken from facilities around the world by the International Atomic Energy Agency (IAEA).

’The rationale for particle analysis is almost so simple it’s brilliant,’ says Klaus L?tzenkirchen of the ITU. ’The idea is that whatever human activity you have, dust will be left behind. And in that dust you will find traces of activities going on in a given installation.’ This is the premise on which nuclear safeguarding and non-proliferation work is based - if activities involving nuclear material are taking place at a site, evidence will be present in dust samples taken from the scene. 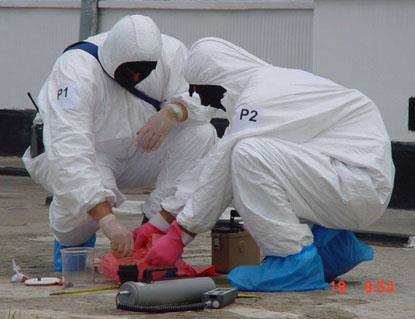 ’The challenge is that the concentrations of uranium and plutonium in these materials range by more than a factor of a hundred million,’ says Ian Hutcheon, group leader for chemical and isotopic signatures in the chemical sciences division of the Lawrence Livermore National Laboratory in California, US.

’You have to be able to develop techniques to not only detect the presence of uranium, but to be able to measure isotope ratios, fissile properties, and to understand what type of grains carry these isotope signatures.’

However, the fairly low mass resolution of the SIMS technique currently used in the ITU labs means the information gleaned from samples is fairly broad brushed, with low mass resolution leaving space for misinterpretation of results. Significantly increasing mass resolution, however, typically kills secondary ion transmission and makes it impossible to separate the signal from background noise.

In contrast, the new LG-SIMS machine will have 10 times the mass resolution of the current machines without affecting transmission, which will make a huge difference to the quality and volume of information specialists are able to gather.

The increased sensitivity of the technique means samples can also be analysed much faster - in just a day rather a week - which is particularly important if analysis is being carried out to detect clandestine nuclear activities.

LG-SIMS can also uncover the minor uranium isotopes - such as uranium 234 and 236 - hidden in the sample, rather than just the 235 and 238 isotopes, which define how enriched the uranium is (enriched uranium being a key ingredient for nuclear weapons and nuclear power generation). Uranium-236 is not natural but is continuously produced in nuclear reactors - finding the 236 isotope therefore tells you that the uranium in the sample has been through a reactor. Identifying these minor isotopes in a sample can also reveal how the uranium was processed and enriched.

3.5 million (?3.2 million), the bulk of which will come from the JRC. A second European LG-SIMS facility is also due to be established by the IAEA in Vienna.

St?phane Portier and Matthias Martin of the hot laboratory division at the Paul Scherrer Institute in Switzerland are experienced SIMS users, but admit that the instruments they use cannot provide the detailed information of the LG-SIMS technique. ’A laboratory equipped with LG-SIMS should considerably enhance the analytical capabilities of the JRC and Euratom,’ they say.