Chemists in the US have devised a single-molecule fluorescent probe that is selective for ozone, which they hope will help address controversy over claims that cells can produce ozone. It may also find use in personal sensors for people with lung diseases who are trying to limit their ozone exposure, say the scientists.

Recent studies have suggested that the body uses ozone to fight off bacteria - but the ozone sensors used suffered from a lack of selectivity, meaning other reactive oxygen species could have triggered a false positive response. Kazunori Koide and colleagues at the University of Pittsburgh have now developed a fluorescent probe that they say can unambiguously detect ozone in biological and atmospheric samples.

When the body is under bacterial attack, neutrophils, the most abundant type of white blood cells, migrate towards sites of infection. Upon arrival, one of their roles is to release powerful oxidants from the antibodies on their surface - which have been shown to play a part in killing the microbes. Recently it has been suggested that ozone is one of these oxidants - but there is scepticism about these claims, says Koide. ’The colorimetric probes that the other groups used are not specific for ozone,’ he explains, ’meaning we don’t know for sure whether cells produce ozone, and that’s why we developed this probe to determine if cells produce ozone or not’.

Koide’s probe is a non-fluorescent aromatic molecule, with an ether side chain which ends with an alkene. The researchers showed that when ozone is bubbled through a solution of this molecule, this double bond undergoes ozonolysis, leading to the side chain cleaving off at the ether oxygen, leaving behind an alcohol - and in this form the molecule fluoresces. The resulting fluorescent output can be measured using a hand-held fluorescence detector or even a laser pen. 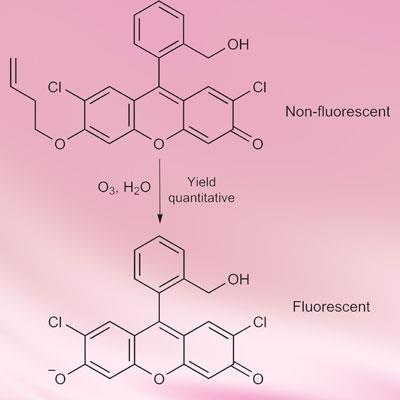 The team successfully demonstrated the selectivity of their probe for ozone by testing it against other reactive oxygen species. They also tested the probe in bovine cells. ’When we added ozone artificially to the cell culture media we were able to detect ozone inside the cells,’ says Koide. From this the team concluded that their method should be amenable to in vitro and possibly in vivo studies.

’We haven’t determined the sensitivity of the probe yet, but early experiments suggest that the detection limit will be low enough to detect nanomolar concentrations of ozone,’ says Koide. ’However, we don’t know yet if this is good enough for the in vivo testing,’ he explains, ’as no one knows for sure yet if ozone is actually there - and if there is, how much.’

Next, Koide says that they are going to probe cells as they fight infection, to address the controversy and work out conclusively whether cells produce ozone or not.

Nobuaki Soh, an expert in the use of fluorescent probes to measure reactive oxygen species from  Kyushu University in Japan, describes the work as very interesting and an improvement on the earlier colorimetric probes. However, Soh adds that the probe generates hydrogen peroxide as a by-product of the ozonolysis reaction, so when using the probe for biological studies the team will need to take care to ensure the concentration of this by-product does not reach toxic levels, he told Chemistry World.

Ozone probes are also important for assessing levels of ground-level ozone, which can be damaging to the respiratory track. There are passive samplers - that measure individual contact with ozone - already available for people with asthma, bronchitis or cystic fibrosis to monitor their exposure. But these are not without their problems, explains Koide. ’There is an ozone badge that you can purchase, but according to the manufacturer’s instructions it is sensitive to moisture.’ And other methods for detecting ozone have the additional step of requiring the removal of interfering chemicals such as sulfur dioxide, he adds. ’So our second direction is to develop a more user friendly badge for asthma patients.’