Australian researchers have reported making grams of graphene using nothing more complicated than sodium and ethanol [1]. The process, according to team leader John Stride at the University of New South Wales, should help accelerate the progress of applications for a much-hyped material that’s proved hard to manufacture cheaply. 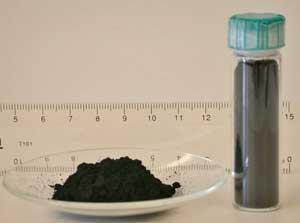 Graphene - a single layer of carbon atoms arranged in a honeycomb lattice - has been hailed as the long-term future of electronics. Superb electrical conductivity, strength and flexibility make it an attractive material for everything from LCDs to transistors. In the nearer term, the flat carbon sheet may find use in many other applications, including batteries, composites and gas storage - though it will have to prove its advantages over carbon nanotubes.

But making large quantities of graphene cheaply is difficult. It can be produced by ripping layers of carbon from a chunk of graphite using sticky tape - the so-called ’Scotch tape’ method. But sorting out the useful atomically thin flakes from thicker graphite debris is a painstaking, and thus expensive, process.

Instead, chemists have developed various ways of processing graphene in solution. Last month, a team at the University of California, Los Angeles reported a chemical process [2] for depositing graphene flakes on silica by first using the solvent hydrazine to reduce graphite oxide. And earlier this year, US and Chinese researchers [3] and scientists in Ireland [4] - published new methods for exfoliating graphite to produce graphene sheets suspended in solution. Surfactants or other intercalating chemicals keep the layers from clogging together.

None of these approaches, however, is as stunningly simple as Stride’s: heat sodium with ethanol for three days, and then rapidly heat (pyrolize) the resulting solid to give a fused array of graphene sheets that is dispersed by a mild shake. Wash, dry, and voila - graphene. Like other research groups, Stride is able to produce flakes measuring in the realms of tens of micrometres in diameter, but without using harsh chemicals or solvents.

The technique, a serendipitous discovery following a failed attempt to make carbon nanotubes, works by a process the team have nicknamed ’the popcorn effect’. ’We get small voids with ethanol trapped in them. When this then rapidly expands and heats, it’s like microbubbles,’ explains Stride. ’You get this very high heat density - power density, essentially - and this, we think, decomposes the material down to elemental carbon.’

Tim Booth of Graphene Industries, a UK company that produces graphene for research purposes, says immediate applications of this approach could be in composites. ’Straight away, the thing that jumps off the page about this is that it suddenly becomes possible to make plastics with embedded graphene, such as anti-static or conductive plastics,’ he says.

What about making wafers coated with graphene, to replace silicon in electronic components? Unlike the Scotch tape method, chemical synthesis and deposition processes do not necessarily produce ’pristine’ graphene - the atomically perfect form giving the best electronic performance. And, says Walt de Heer, who studies graphene at the Georgia Institute of Technology, any process that results a randomly distributed solution of tiny flakes just isn’t going to cut the mustard. ’The electronics industry will smile at this and say, "Well, it’s nice and it’s a good starting point," but for them, total control of the material is what it’s about,’ he says. ’You can’t have random flakes lying around and all kinds of residues from the process still in there.’

Stride says his team are trying to figure out how to chemically manipulate the sheets to make positioning on a substrate more straightforward, although he admits this work is in its earliest stages. By contrast, De Heer’s own approach, which he is working closely with IBM and Intel to develop, focuses on growing graphene directly on silicon carbide chips, by heating the chips in a vacuum so that silicon atoms escape, leaving carbon behind. At several hundred dollars per square centimetre, it won’t come cheap.

Rod Ruoff, a graphene expert at the University of Texas at Austin, thinks it is too early to predict whether graphene will have a long-term future in the electronics industry. But he says that now more chemists are becoming interested in graphene some non-electronics applications, such as gas storage, will start to be explored. ’The surface area that Stride’s team got when they dried their material down is very high. So I think this holds promise for adsorption of different types of gases, possibly including hydrogen.’