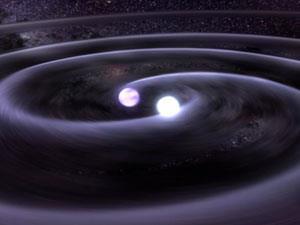 Researchers have described a new type of chemical bond distinct from the two classic modes of atomic bonding – ionic and covalent. The new bonding, predicted by complex quantum mechanical computations, occurs only in hugely powerful magnetic fields – tens of thousands of times greater than can be generated in the laboratory. Such strong magnetic fields are not fanciful, however. They exist in the vicinity of certain types of rotating stars, such as white dwarfs.

White dwarf stars are exceptionally dense and come about when a star – like our sun – collapses, but isn’t big enough to go supernova or form a neutron star. A white dwarf the size of the Earth would have almost half the mass of the sun. And because they’re so massive and spin so rapidly they can generate huge magnetic fields in excess of 100,000 tesla. A typical MRI scanner, by comparison, only produces a magnetic field of 1.5 tesla.

The work, led by Trygve Helgaker at the University of Oslo in Norway, not only provides insights into fundamental aspects of electronic interactions with magnetic fields, but also sheds light on the exotic chemistry that exists in stellar environments. ‘In atomic bonding on Earth, everything is determined by electrostatics, and for these calculations we do not need to take the magnetic field into account – it is effectively zero,’ says Helgaker. ‘But as you start to introduce these extreme magnetic fields, the magnetic forces become as strong as the Coulombic forces and start to influence the whole composition. The chemistry becomes rather exotic and different.’

Helgaker’s team used a computational method called full configuration-interaction (FCI) to predict what would happen to hydrogen molecules in an ultra-high magnetic field. ‘In the lowest energy state, the ground state, as you increase the magnetic field the molecule becomes higher and higher in energy and becomes more strongly bound, and aligns itself in parallel with the field,’ Helgaker explains. However, if one electron of a hydrogen molecule is pinged into an excited state, occupying what is known as the lowest anti-bonding orbital, ordinarily the molecule would fall apart into its two constituent atoms. ‘But in these strong magnetic fields that does not happen,’ says Helgaker. Here, the orbitals orient themselves perpendicular to the magnetic field and the motion of the excited electron interacts with the magnetic field in such a way that it becomes energetically favourable for the two atoms to remain bonded. ‘Even though the electrons are in the antibonding state, within the magnetic field bonding is favoured,’ says Helgaker. This bonding is neither ionic nor covalent, but a new type of bonding with a paramagnetic character.

‘If we want to understand chemistry in regions of space where there are magnetic fields of these huge magnitudes, we need to take into account that the bonding is probably different,’ says Helgaker.

Importantly, the work has confirmed that a less computationally expensive method for doing similar calculations, the Hartree-Fock technique, largely holds good. This will make it feasible to study more complex molecules in strong magnetic fields – something that would be too onerous with FCI.

Fred Manby, professor of theoretical chemistry at the University of Bristol in the UK, is impressed by the study. ‘Here the field is far too strong to be applied as a small correction, so some serious rethinking of the theory was required,’ Manby comments. ‘This is therefore a major technical achievement, in addition to bringing some real theoretical rigour to our understand of matter under these extreme – and experimentally challenging – conditions.’