Hydrogen bond to be redefined 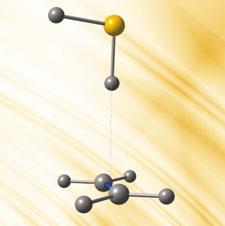 The International Union of Pure and Applied Chemistry’s (Iupac’s) Physical and Biophysical Chemistry Division is preparing to scrap the familiar hydrogen bond definition, in light of recent evidence about its true nature.

Two key factors are motivating the bonding interaction’s redefinition. One is a shift in the traditional view that a hydrogen bond is a purely electrostatic attraction between dipoles or charges on a hydrogen and another, electronegative, atom.

Elangannan Arunan, who co-chairs the Iupac group assigned to categorise hydrogen bonds and other intermolecular interactions, highlights that there is a variety of evidence, including nuclear magnetic resonance (NMR) data, that some electron density is shared between them. ’This shows that the hydrogen bond has a covalent nature,’ he says.

The current classification also concentrates on fluorine, oxygen and nitrogen interactions with hydrogen which Arunan says research has shown to be too simplistic.

The chemical community has until the end of March 2011 to respond. Barring significant objections, the new definition will be adopted shortly thereafter.

Researchers have used carbon nanofibres to separate components of a nanothermite system to make it much safer to use.

Nanothermites are composed of metal oxide nanoparticles and a reducing metal powder, such as aluminium, that when mixed react in a very exothermic reaction. Nanothermites can have potential applications as propulsion for rockets, explosives, or as pyrotechnic initiators. However, the sensitive mixtures are difficult to handle and transport.

Now, scientists in France have replaced the metal oxide nanoparticles that are usually used with carbon nanofibres filled with manganese oxide so that the oxide is separated from the aluminium making it safer.

The 1000 Genomes Project has completed its pilot phase. The international public-private consortium intends to create a freely available map of all the genetic variations between human individuals.

The proof of principle work has used two strategies to increase efficiency: combining partial data from many people and sequencing protein coding genes only. The pilot has shown that these approaches work well and both will be used to complete the full scale project.

To date the project has sequenced the whole genomes of 179 people and the protein coding genes of 697 people, revealing 95 per cent of currently measurable variations. By the end of the project in 2012, it will have collected the sequences of 2500 people and identified more than 99 per cent of human variants.

After a year, researchers have retracted a much criticised paper in  Science  (DOI: 10.1126/science.330.6006.912-a) describing the synthesis of 1676 quenched fluorescent dye-metabolite compounds.

In August, the authors from Spain and the UK vowed to validate their work (see Chemistry World, September 2010, p11), but this now seems out of reach and attempts to defy the ethics committee of the Spanish Institute that recommended the retraction of the paper in July, have failed.

’To our profound regret, peer inspection of the paper after publication revealed errors and omissions in the information provided on the chemistry underlying array compound synthesis, and the array data obtained,’ said the authors. ’Given the errors in the paper, and the scepticism about the array that they have generated, we retract the paper.’

A new environmentally friendly concept in functionalising polymers allows coloured dye to be integrated directly into polymers that can be used in clothes and packaging, say UK scientists.

The team attaches dyes to the polymerisation catalyst and at the end of the process these dyes are incorporated in the polymer structure.

Host-guest chemistry can stick together cubes of gel like molecular velcro.

Researchers from Osaka University in Japan report in Nature Chemistry  (DOI: 10.1038/nchem.893) how polymers that have ’host’ or ’guest’ molecules attached to them can bind together when mixed in a little water.

The Japanese team has shown how the microscopic process can stick together materials on the macroscopic scale. The host-guest interactions the team used are selective - different ’guests’ prefer to sit in different ’hosts’ - and strong. For one of the combinations the team made, the forces are so strong that the gel cubes will break before the join can be pulled apart, for others the process is reversible.

The researchers plan to use the technology to immobilise cells and treat wounds.

Single molecule magnets (SMMs) can orientate on a gold surface, say Italian scientists in Nature (DOI: 10.1038/nature09478). This could help in the development of molecular scale ’spintronics’ - electronic devices based on electron spin. 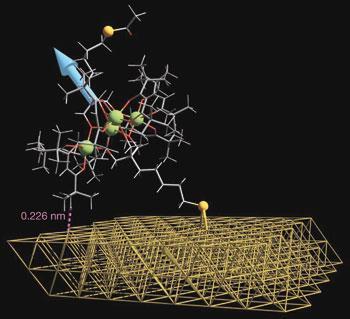 The team, based at the University of Florence, surrounded an iron cluster with a circle of stocky ligands, with two longer ligands coming out of the centre like an axel. One of these long ligands attaches to a gold surface and the steric interactions from the stockier ligands orientate the molecular axis, and hence the magnetisation axis.

The SMMs have been shown to have magnetic memory, a key feature for data storage. In addition, the clusters show quantum tunnelling effects, from one spin state to another, which could lead to discrete levels of magnetisation increasing the data storage capabilities of the SMMs.

The researchers now hope that others will come forward to collaborate with them towards the next step: improving the SMMs and using them in data storage.

The European Research Council (ERC) has awarded some

580 million (?494 million) in ’starting grants’ to 427 top early-career researchers, an increase of more than 40 per cent over last year’s starting grant call.

The grants, worth up to

2 million each, will enable new talent to carry out pioneering ideas in any field of research. Of the 427 grants, 11 per cent have been awarded to researchers working in the physical and analytical chemical sciences and materials and synthesis sectors.

It is hoped the grants will lead to more Nobel prizes for ERC-funded talent, following in the footsteps of Konstantin Novoselov, who won the 2010 physics Nobel prize for his work on graphene together with Andre Geim (see Chemistry World, November 2010, p8).

A chemical test to detect levels of chemical dispersants used in the Deepwater Horizon oil disaster in fish, oysters, crabs and shrimp has been developed and is being used by the US National Oceanic and Atmospheric Administration and the US Food and Drug Administration (FDA).

In the Gulf of Mexico, scientists have tested 1735 marine tissue samples for dioctyl sodium sulfosuccinate (DOSS) - a major component of the dispersants used. DOSS is also approved by the FDA for low level use in various household products and medication.

Only 13 samples showed trace amounts well below the safety threshold of 100ppm for fish and 500ppm for shrimp, oysters and crabs. These levels don’t pose a threat to human health and indicate that DOSS does not build up in fish tissues.

Hydrogen bond set to be redefined

Researchers encourage single molecule magnets to bind to a gold surface in a certain orientation, retaining the magnet’s properties