Nitrous oxide is the single most important ozone depleting substance and emissions must be curbed, say scientists

Nitrous oxide is the single most important manmade substance reducing ozone in the atmosphere, according to US researchers. The team has calculated the ozone depleting potential (ODP) of nitrous oxide and found it to be comparable to several currently controlled substances.

Memorable images of a hole in the Antarctic ozone layer taken by British scientists in the mid-1980s raised the public profile of ozone depletion. Since ozone is known to shield the Earth from harmful ultraviolet radiation, action soon followed in the form of the Montreal Protocol of 1987, which sought to control emissions of chemicals responsible for destroying atmospheric ozone. The most potent are the chlorofluorocarbons (CFCs), and their use was phased out during the 1990s. Since then, use of hydrochlorofluorocarbons (HCFCs), introduced as temporary replacements for CFCs, has also been reduced.

Now, scientists from the National Oceanic and Atmospheric Administration (NOAA) at Boulder, Colorado, US, have used a well-known atmospheric model and focused on nitrous oxide as a possible cause of ozone destruction.  ’The ODP of nitrous oxide is much smaller than the ODP of CFCs, but is comparable to the ODP of many HCFCs,’ says NOAA scientist Robert Portmann. 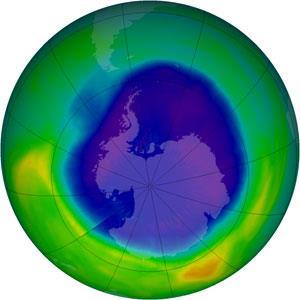 Nitrous oxide is likely to be the most significant ozone depleting substance throughout the 21st century, contributing to the hole in the ozone layer (above)

Nitrous oxide bears similarities to CFCs in that they are both very stable in the troposphere where they are emitted, and when they reach the stratosphere release active chemicals that destroy ozone through chlorine or nitrogen oxide-catalysed reactions.

Atmospheric chemists have understood this process for decades, but a focus on CFCs and HCFCs meant the importance of nitrous oxide was overlooked. As team member John Daniel explains:  ’It’s a testament to the success of the Montreal Protocol that nitrous oxide emissions have become the most important ozone depleting substance emitted as a result of human activities.’

The group from NOAA say roughly one-third of nitrous oxide emissions are manmade, with agriculture the largest source. ’If you look ahead nitrous oxide will remain the largest ozone depleting emission for the rest of this century’ says A R Ravishankara, who led the study. ’The next question someone might ask is how we can reduce these emissions,’ adds Daniel.