NMR with a light touch 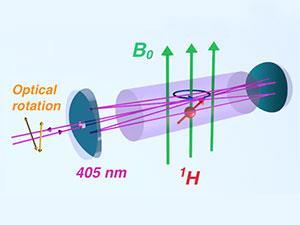 Interactions between NMR-active nuclei in a sample and laser light could lead to a new, simpler form of NMR

Today, NMR spectroscopy is routine and ubiquitous. Decades of research and development have made the technique commonplace, giving labs all over the world sophisticated instrumentation that performs elegant experiments at the touch of a button. But despite the technical and experimental advances, in one respect it remains almost completely unchanged: the NMR signal is still picked up by placing a sample in a coil of wire and inducing a current. Mike Romalis’ group at Princeton University in the US is among a handful of groups worldwide trying to develop an alternative: detecting NMR using light.

Romalis’ technique relies on the phenomenon of nuclear spin optical rotation (NSOR) in which the interaction between nuclear spins and nearby electrons causes linearly polarised laser light to rotate as it passes through the sample. In any optically active medium, light rotation occurs because the components of linearly polarised light – left and right circularly polarised beams – experience different refractive indices and so travel at different speeds through the medium, moving out of phase with each other. This asymmetry can be induced by applying a magnetic field, a phenomenon first observed by Michael Faraday, but for NMR-active nuclei (1H for example) the individual nuclear spins also influence the phase of the light, producing the NSOR effect. Measuring the degree of rotation is therefore a measure of the sample’s NMR response. ‘It’s an optical effect similar to a birefringent crystal,’ says Romalis. ‘In this case, the optical activity in the sample is caused by the nuclear spin.’

In 2006, Romalis first reported the detection of NSOR in liquid xenon and water.1 In his latest experiment, he takes another exploratory step towards harnessing this phenomenon for practical use.2 Romalis measured NSOR in a series of organic liquids and not only determined the size of the NSOR effect for each sample, but also deconvoluted the measurement to see how it is affected by distinct molecular moieties. ‘For example, we compare water with ethanol and methanol; each has an OH group but then different other groups,’ says Romalis. ‘By comparing these we can see the contribution of each of the parts – you can see that an atom in a different place in the molecule has a different optical rotation, analogous to a chemical shift in NMR.’ Predicted NSOR values calculated by Romalis’ collaborator, Juha Vaara at the University of Oulu in Finland, confirmed the observed effects.

Romalis admits the idea is still in its infancy but, ultimately, it could have several practical and analytical advantages: the effect is observable at low magnetic fields, so expensive superconducting magnets are not required; using a laser beam permits small sample volumes, such as in a microfluidic device or a hollow fibre; and the effect scales with the mass of the nucleus so measurements of larger nuclei are more easily obtained. ‘It’s hard to say if it will become a widely used technique or a special technique that people use on occasion,’ says Romalis. ‘At the moment, it is led by curiosity.’

‘It’s always exciting to have a new property, and it’s one I’ve been interested in for some time,’ says David Buckingham, emeritus professor at the University of Cambridge, UK, who investigated the use of laser light in NMR in the 1990s. ‘We, and others, had looked at the inverse effect – the effect of light on NMR – but we found it to be very small … I’m very happy to see this being revisited.’ But Buckingham also notes that it is the technique’s potential that still holds the greatest interest. ‘They haven’t resolved the different nuclear resonances [in a molecule] … if each nucleus could be seen, that would make it much more exciting.’

Ray Freeman, also at Cambridge, agrees that the technique is attractive, but to convince chemists it must produce spectral lines for distinct chemical sites. ‘It is still heavy physics, reminiscent of the NMR method circa 1952,’ he says. ‘To be useful as an analytical technique it would need to excite the interest of the practising chemist, as the 1952 paper on the high-resolution spectrum of ethanol did. When NMR first crossed this sticking point, there followed a revolution in chemistry.’