Not on my back lawn

Moles beware: the chemical repellent responsible for the fox-like odour given off by several species of fritillary plants has been identified.

Moles beware: the chemical repellent responsible for the fox-like odour given off by several species of fritillary plants has been identified, potentially boosting the gardener’s armoury against their burrowing foes.

Green-fingered folklore already suggests planting fritillaries around a garden to discourage tunnelling moles from wreaking havoc with a carefully cultivated lawn, and giving gardeners the option of using a chemical spray could help to keep the little gentlemen in velvet at bay.

The odour of the Crown imperial fritillary, Fritillaria imperialis, is particularly offensive. This is a problem for plant breeders, who fear that potential customers are turning their noses up at the pungent smell of this and other species in this attractive genus. 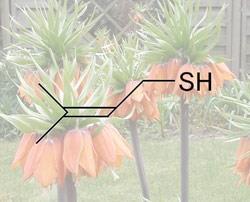 Selective breeding to drop this unfortunate trait could result in odourless varieties that people would be prepared to grow indoors, says Hans Helsper, a plant biochemist at Plant Research International, an offshoot of Wageningen University and Research Centre, Netherlands.

Helsper and his colleagues analysed volatile compounds emitted from the bulbs of six different species of fritillary. Using gas chromatography olfactometry, they detected several fragrances, although most of these were obscured by the fox-like stench. Gas chromatography-mass spectrometry (GCMS) helped to put a name to the offending compound: 3-methyl-2-butene-1-thiol.

Synthetic 3-methyl-2-butene-1-thiol might be a good way to encourage a family of pesky moles to move on to pastures new, says Helpser, who reports the discovery in the current edition of the Journal of Agricultural and Food Chemistry.

Fritillaries probably produce the chemical as a defence against herbivores, suggests Graeme Jones, an organic chemist at the University of Keele. But without a bioassay it’s difficult to be sure if moles themselves would actually eat fritillaries, he adds.

Helsper is now on the lookout for collaborators who might be willing to test the efficacy of this chemical as a mole deterrent.