Throughout his election campaign, Barack Obama repeatedly promised to usher in a ’new era’ of innovation and restore US scientific and technological standing in the world. The new president’s picks for executive science posts, including two Nobel laureates and many well-known academics, appear to back up that rhetoric.

’We have never had quite this array of scientists in federal government leadership positions,’ enthused Alan Leshner, CEO of the American Association for the Advancement of Science (AAAS), after Obama’s nominations were revealed in December. The nominees are still to undergo Senate confirmation, but are expected to pass through the process with relative ease.

The very fact that Obama chose his top science adviser - Harvard University physicist John Holdren - before taking office makes a welcome change from the former administration. George W Bush waited roughly a year after becoming president before he hired a science advisor, John Marburger. The delay meant he had no designated expert to consult as he made decisions on climate change, embryonic stem cell research and energy policy.

Bush also demoted Marburger’s post, giving him less direct Presidential access. In contrast, Obama has bumped Holdren’s post back up to cabinet-level status, elevating his position to ’Assistant to the President for Science’. This includes the responsibility of running the Office of Science and Technology Policy (OSTP), whose credibility the president has vowed to restore after Bush had removed it from the White House.

In announcing Holdren’s appointment, Obama called him ’one of the most passionate and persistent voices of our time about the growing threat of climate change’. Holdren, who has likened the US’s current approach to climate change to being in ’a car with bad brakes driving towards a cliff in the fog’, was one of the first scientists to sound the alarm that the Bush administration ignored or subverted science for political purposes. The Bush White House, he has said, engaged in ’systematic understatement of the danger’ regarding global warming.

Holdren comes to the White House from Harvard University, where he was a professor of environmental policy at the Kennedy School of Government and headed the school’s Science, Technology, and Public Policy Program. He also directed the Woods Hole Research Center, and has served as president of AAAS. ’None of the great interlinked challenges of our time - the economy, energy, environment, health, security, and the particular vulnerabilities of the poor to shortfalls in all of these - can be solved without insights and advances from the physical sciences, the life sciences, and engineering . Obama understands this with perfect clarity,’ Holdren said following the announcement of his nomination. 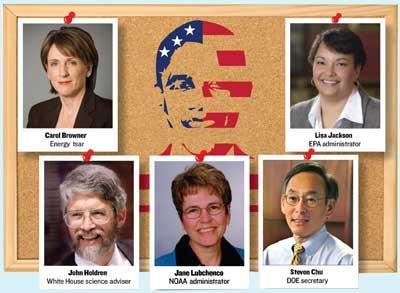 Obama’s choice for secretary of the US Department of Energy (DOE) was just as inspiring to academic researchers. Nobel Prize winning physicist Steven Chu, who was previously in charge of DOE’s Lawrence Berkeley National Laboratory (LBNL), is the first career scientist to head DOE since its inception over 30 years ago. He replaces financier (and trained chemical engineer) Samuel Bodman.

Chu, who shared the 1997 Nobel Prize in Physics for his work trapping atoms with lasers, has spent much of his career urging scientists to find environmentally-friendly alternatives to fossil fuels. He is a keen supporter of nuclear energy and is strongly in favour of developing carbon capture and storage technologies to mitigate the environmental impact of relying on coal for energy needs. Chu is also enthusiastic about second generation biofuels, and improving the national electricity grid. And he spearheaded LBNL’s ’Helios’ solar energy project.

According to Daniel Weiss, who directs climate strategy for the Center for American Progress Action Fund (CAPAF), a liberal thinktank, Chu has ’a unique set of qualifications to oversee the unruly Department of Energy’ - being a physicist, DOE laboratory manager, and energy efficiency expert combined. He is politically relatively inexperienced, however.

Completing the trio of Obama’s ’science dream team’ is Oregon State University marine biologist and ecologist Jane Lubchenco - the president’s pick to head the US National Oceanic and Atmospheric Administration (NOAA). Also keenly concerned with addressing global warming, Lubchenco said that she was ’very much looking forward to a new administration that does respect scientific information and that considers it very seriously in making environmental policies’. Another former president of AAAS, Lubchenco will be the first woman to head NOAA

Two other key Obama appointees could also help advance the new administration’s agenda. Carol Browner, who was a long-time director of the Environmental Protection Agency (EPA) under former President Clinton, is the first to occupy a newly created ’energy tsar’ position.

Serving as the premier Presidential Assistant on Energy and Climate Change, Browner is in charge of prioritising and coordinating energy and climate research across the US government. She was known to stand up to private interests in her efforts to curb air and water pollution during her tenure at EPA.

Impacting policy decisions involving the environment and chemical regulation is Obama’s choice for EPA administrator, Lisa Jackson - a chemical engineer who worked at EPA for approximately 16 years and then served as the commissioner of the New Jersey Department of Environmental Protection. She replaces Stephen Johnson, who has been criticised by Democrat senators for allowing

EPA decisions to be swayed by corporate and political interests.

Obama says Jackson shares his commitment to restoring EPA’s ’robust role in protecting air, water, and natural resources’. Jackson, who is the first African American to head EPA, said her top priorities involve addressing toxic chemicals and children’s health issues, as well as air pollution, waste site cleanup, and justice for communities who bear disproportionate environmental risks. She has, however, been criticised by the non-profit environmental protection organisation Public Employees for Environmental Responsibility (Peer), for embracing ’a highly politicised approach to environmental decision-making’ and preferring a ’closed-door model of decision-making’ involving regulated industry executives and lobbyists.

In a January 14 hearing before the Senate environment & public works committee, Jackson suggested she would, if elected, allow California and other states to set their own regulations limiting greenhouse gas emissions for vehicles, bypassing federal standards - a request denied by the previous administration.

’We are extremely excited to work with such a seasoned staff of professionals,’ says Cal Dooley, CEO and president of the American Chemistry Council, the major industry trade association for US chemical companies. ’These administration leaders will have a critical role in developing and implementing important national policies on energy, climate and chemicals management.’

The US science community’s general sense of optimism and enthusiasm about Obama’s decisions is palpable. As AAAS’s Leshner summarises: ’We are going to have science leaders in the federal government who are genuine experts on each of the issues that are so central to bringing the United States back to its prominent position in the world.’ 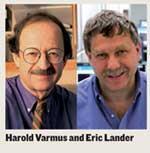 Obama will also receive scientific input from the President’s Council of Advisers on Science and Technology (PCAST): an external panel of representatives from industry and academia charged with advising the president on a host of issues related to technology, research priorities, and science education.

Obama says he wants to ’remake’ PCAST as ’a vigorous external advisory council’ that will shape his thinking on the scientific aspects of his policy priorities. Under Bush, PCAST’s membership was criticised as being heavily drawn from private industry, particularly information technology fields, rather than from the laboratory. In fact, even among the university representatives that served on the council under Bush, all but one were academic administrators rather than researchers.

PCAST’s new co-chairs are Holdren and two prominent biologists selected by Obama - the well-known Massachusetts Institute of Technology (MIT) genome biologist Eric Lander, and the Nobel Prize-winning scientist Harold Varmus, who served in the Clinton administration as director of the US National Institutes of Health, which is the nation’s primary biomedical research agency.

’It is exciting to have an administration that deeply understands the importance of science and scientific thinking,’ said Lander.