One year on from Hungary's red mud disaster

Hungarian government officials commemorated the first anniversary of the country’s worst industrial accident yesterday. The ’red sludge disaster’ occurred on 4 October 2010, when a waste storage reservoir retaining wall collapsed, releasing 1.9 million m3 of a by-product from the conversion of bauxite into alumina (Al2O3). The caustic sludge flowed down through a small valley in Veszpr?m County, western Hungary, and covered a long, thin strip of land 4000ha in size, including 1036ha of farmland and several villages. Ten people were killed and 120 were seriously injured.

Yesterday, a wreath was laid at a memorial site in the village of Kolont?r, whose residents suffered the most casualties and at the newly built Devecser Memorial Park to honour police, firefighters and others who showed ’extraordinary courage’ during the disaster. 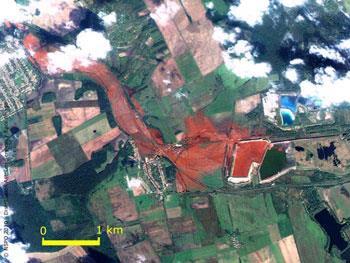 J?nos Sz?pv?lgyi, director of the Institute of Materials and Environmental Chemistry of the Hungarian Academy of Science, who advised on the clean up, says that all but ’one to two per cent’ of the clean-up work is now done. ’The area is absolutely safe now,’ he adds. ’There is no danger to humans, animals or crops.’

Most of the sludge has been removed, although some residue remains, he says. The sludge, which includes very fine particles, penetrated the soil to an average depth of 4-5cm, but in a few locations as deep as 15cm, Sz?pv?lgyi says. After the sludge on farmland was removed, the soil was mixed with cow dung and humic acid, a process that he says has helped restore beneficial soil microorganisms.

’Now there is flourishing vegetation, even better than before in some places,’ Sz?pv?lgyi says, adding that corn and wheat were planted on some patches in the spring. He says that there is no sign of metal contamination of the crops. 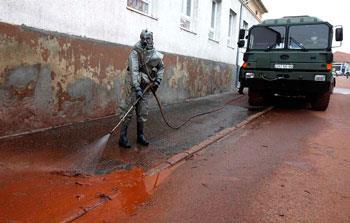 Clean up of the affected area cost ?100 million

One possible reason for the flourishing vegetation is that the sludge contains trace mineral elements, such as titanium, important for plant growth. A second possible reason is that soil in the area is naturally acidic, which may also have mitigated some of the worst effects of the caustic sludge.

On 16 September Hungarian Aluminium (MAL) was fined 135 billion forints (?389 million). The fine is the largest allowed and is four times the estimated €115 million (?99 million) spent cleaning up the area, building new houses and other disaster-related costs. As a result of the disaster, MAL has now switched to a more expensive dry storage system for waste, where the sludge by-product has a powder-like consistency.

Zolt?n Kov?cs, state secretary for Hungarian government communication, tells Chemistry World that MAL plans to fight the fines in court. Kov?cs says the company is also being sued by around 30 people for damages. Furthermore, around 15 past and present employees of the firm are under criminal investigation by the National Bureau of Investigation.

If MAL, which employs 6000 people in the area, loses the court case and has to pay up, Kov?cs says the government will step in to ensure the company doesn’t go under.

MAL, a former state-owned company, did not respond to requests for comment. However, in a statement the current management says the company is not at fault for the disaster and blames ’planning and building deficiency of the red mud reservoir during the management of the predecessor state-owned enterprise’.

Kov?cs, who last year was at the disaster site the day after the reservoir wall broke, says the destruction was horrible. ’We felt this area could never be inhabited again,’ he says. He returned for this week’s ceremonies to find the area back to normal. ’It is kind of a miracle.’