Organic compound comes to the aid of thirsty plants

A synthetic mimic of a plant hormone known to help crops survive drought has been discovered by US scientists. Thanks to an unusual research collaboration, one of the hormone’s receptors was also identified - a controversial target which scientists have been hunting for over 20 years.

Sean Cutler, at the University of California-Riverside, used chemical genetics - where chemicals are used to identify proteins - to help him investigate the action of abscisic acid (ABA) in plants. ABA is a stress hormone, produced naturally in plants, that is known to help them survive drought and other environmental stresses - although how and why it does this is not fully understood. ’No one is really clear what the real receptor for this pathway is yet,’ says Cutler.

’We discovered a chemical that we called pyrabactin that turns on the ABA pathway,’ says Cutler. This means that when it is sprayed onto plants it acts in the same way as ABA, and helps them survive with less water. 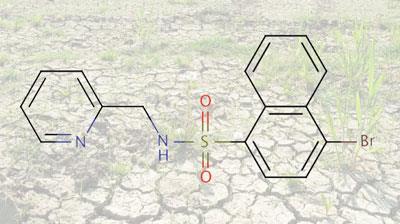 A sulfonamide, called pyrabactin, has been found to help plants survive drought

Water use is the next big thing the agricultural industry, Cutler adds. ’We need better crops that need less water, and also when a mild drought occurs we need tools for dealing with that,’ says Cutler. One known approach is to spray ABA onto crops, but the molecule is light-sensitive and rapidly degrades as soon as it is sprayed, also deactivating while sat on shelf before application. Additionally, ABA has a fairly complicated synthetic route, explains Cutler. ’What we want is something more potent and more stable.’

Whilst Cutler admits that pyrabactin itself will probably never be used commercially, ’it does prove that we can use simple synthetic organic molecules to activate this signalling pathway,’ he says. And as well as identifying the more stable mimic, the team were also able to use it to probe the ABA pathway itself, and to look for elusive ABA receptor proteins.

Locating receptors for ABA is a highly controversial topic, explains Cutler. In the last four to five years they have been four other papers where people have reported what they thought were receptors for ABA. So far two of these have been withdrawn, as their results could not be reproduced, and one other is under question. These earlier papers used a biochemical approach where researchers looked for proteins that bind to ABA in a test tube, and Cutler is the first to apply chemical genetics to this problem.

’We looked for genetic mutations that would block the effect of our chemical, reasoning that that would identify the target gene,’ says Cutler. People have been looking for mutations that block the effect of ABA for over 20 years, and much of the confusion has come from the fact that there appears to be at least 14 genes in this receptor family. Pyrabactin turns on at least six of these genes, but turns on one more than the others, and it is this preference that helped Cutler identify that gene.

Due to the controversy, Cutler wanted to be sure his findings were correct before publishing his work, and took the unusual step of handing his results to direct competitors and asking them if they could verify his findings. ’18 months ago I was sitting on a receptor that I though was the real deal, and using public resources I found that other labs had ordered some of the genes that we had identified,’ says Cutler. He then took the unorthodox approach of e-mailing all these people and asking if they wanted to collaborate - and all but one agreed.

’About five other labs in the field joined in on the paper and they agree that this is one of probably 14 real receptors,’ says Cutler. ’They provided independent validation and added tremendously to our paper,’ he adds. ’It was a little experiment and I would say for the most part it has been great, and unquestionably I would do this again.’

’Currently, the rewards in science are not matched to what is actually best for science,’ explains Cutler. ’The same people are doing the same thing independently, and worrying about being scooped. If you were an alien watching this you would think that this makes absolutely no sense, "this isn’t the way to make discoveries" they would say.’

And the people who he collaborated with agree. Peter McCourt, from the University of Toronto, Canada, was one of the people who received Cutler’s e-mail. ’It was a brave thing to do, because of the atmosphere of science these days, where the grants agencies require that you are the first.’ McCourt says that he found it refreshing that most people agreed to join in, and adds that he is considering taking the same approach himself with some results he has at the moment.

Pedro Rodriguez from the Polytechnic University of Valencia in Spain also had a positive experience collaborating with Cutler: ’This is perhaps a model to follow in the future. We compete so much, instead we should put our effort on getting good results.’

Only one of the scientists approached by Cutler declined to collaborate. ’He wanted to publish his own paper,’ Cutler explains. This other paper - which reports a related gene to the one identified by Cutler - is written by Erwin Grill at the Technical University in Munich, Germany, and is being published in the same issue of Science.