When Schering-Plough bought the Organon Biosciences unit of Akzo-Nobel in March this year, industry watchers were surprised by the $14.4 billion (?7.2 billion) price tag.

’When you compare it to Bayer’s purchase of Schering AG last year, they paid

14.3 billion (?9.7 billion): only slightly more for a much larger company with a bigger pipeline,’ Jacob Pleith from Scrip World Pharmaceutical News  told Chemistry World. ’But it just demonstrates the lack of interesting take-over targets in the market.’

It also attests to the promising drugs that Organon is now steering through the final Phase III stage of clinical trials. Schering says that the acquisition will fill a gap in its late stage pipeline and provide immediate access to central nervous system and women’s health care products.

The most high profile of Organon’s drugs is the antipsychotic asenapine, tentatively slated for launch later this year. It was previously being developed in conjunction with Pfizer, who pulled out of the collaboration last year following mixed clinical trial results. Asenapine is intended as a treatment for the symptoms of schizophrenia and the acute mania associated with bipolar disorder, which affect about one per cent of people worldwide. It aims to tackle the incoherence experienced by patients, even when their hallucinations are being effectively treated with traditional therapies. It has plenty of competition from experimental drugs with the same goal, but Organon hopes that its unique mode of action will set it apart. The molecule acts on both serotonin (5HT-2a) receptors and dopamine (D2) receptors, blocking the former and partially stimulating the latter. This combined action aims to combat hallucinatory symptoms without inducing the debilitating side effects seen in first generation schizophrenia treatments. Those drugs completely blocked the action of dopamine, which can lead to Parkinsonian side effects such as tremors or other movement problems.

Sweet success
The company also boasts an award-winning molecule: Sugammadex, designed to quickly reverse the effects of a muscle relaxant called rocuronium (sold as Zemuron or Esmeron) that prevents reflex movements during surgery. Rocuronium is an aminosteroid that paralyses muscles by blocking receptors for the neurotransmitter acetylcholine. Most agents that reverse this muscular block modulate the effects of acetylcholine, rather than the relaxant itself. They directly reactivate the motor nerves, usually by inhibiting the enzyme that breaks down acetylcholine. But this can cause dangerous side effects by over-stimulating the muscle of the heart and lungs. 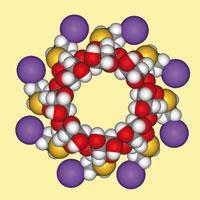 In contrast, Sugammadex’s cyclodextrin structure allows it to swallow up the muscle relaxant without interfering with the nerves themselves. Cyclodextrins are hollow, cylindrical molecules that are fat-loving on the inside and water-loving on the outside, so they can engulf fatty molecules whilst maintaining their solubility. They have previously been used as drug delivery agents, but the Organon team developed a cyclodextrin that was a perfect fit for rocuronium.And it has recently earned the team the 2007 Malcolm Campbell Memorial Prize, a bi-annual medal and ?2000 award from the biological and medicinal chemistry sector of the Royal Society of Chemistry. ’This was one of my favourite ever drug discovery projects, in over 20 years of pharmaceutical research,’ said David Rees, who together with Ming Zhang led the team that discovered Sugammadex. Although the drug was specifically designed to engulf rocuronium, Rees thinks that the principle could have much broader applications. ’Almost all drugs launched in the last 20 years are classified as either small molecules or biologicals,’ he said. ’Sugammadex is different because it has no intrinsic pharmacological activity of its own and its molecular weight is well in excess of that found in small-molecule drugs. It raises the possibility of a new chemistry-led approach to the discovery of medicines.’

New blockbuster on the block?
Organon’s women’s health products come in the shape of Nomac/E2, the first oral contraceptive pill to contain oestradiol, the form of oestrogen produced naturally by the body, and ORG36286, a long-acting fertility hormone, which stimulates the production of eggs by the ovary.

Yet Schering-Plough’s enthusiasm for its newly-acquired pipeline has not silenced its critics. Many say that the company has too much riding on the effectiveness of asenapine, which is yet to be conclusively proven. But Pleith points out that there are benefits beyond these five new drugs that drove Schering-Plough to take the plunge. ’Schering are also paying for a way into Europe,’ he told Chemistry World. ’And Organon Biosciences has a very strong animal health business. It’s lower margin and less exciting, but much more important to the company than people realise.’

But if asenapine does deliver as promised, Schering will be launching something of a dying breed - a brand new blockbuster.