Group use origami to demonstrate their new electrode printing technique 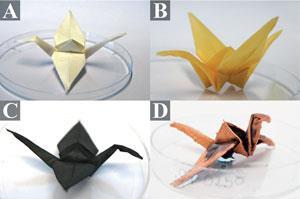 Origami keeps its shape throughout the process

You might see crunched up bits of paper and slightly scuffed lab books around the lab but origami cranes are less of a common feature. In Stefan Glatzel, Zoë Schnepp and Christina Giordano's lab, however, they are part of the experiment itself.

Giordano's lab at the Max Planck Institute of Colloids and Interfaces in Germany, has been working on making structured carbon electrodes from paper using inkjet printing. Many material chemists have been looking at printing microelectronic components but often the materials used are thermally unstable, or require supports that can't deal with the high temperatures.

Giordano and her team have solved the problem by using paper as both the support and one of the reactants that make up the electrodes. The team used origami to demonstrate that the electrical properties of the paper weren't lost during treatment.

The paper is treated with an iron nitrate 'ink' and then calcined under nitrogen to give black graphitic carbon, or the black crane on the bottom left of the image. They then coated their carbon crane in copper to show how easily the material could be processed. In practice, the team will not be creating conductive cranes but hope their technique could be a quick and cheap way to print paper-based, flexible electronics.