UK and Indian scientists have embarked on a collaboration to develop a new protein-based treatment for hepatitis C, which they say will provide an affordable drug urgently needed in countries where resources are limited.

The new treatment is based on a protein produced by immune cells, called alpha-2 interferon, which prevents the hepatitis C virus from replicating. For the protein to be clinically useful, a polymer, Polythylene glycol (PEG), is attached to it. This prevents its rapid degradation in the body. So-called PEGylation of proteins to make bio-drugs is not new, but until now it has proved a costly process- resulting in an expensive drug.

Sunil Shaunak from Imperial College London, UK, and his international team have now developed a technique to make this a much cheaper and more efficient process.

Reports have called it patent-busting but Shaunak says that he and his colleagues are ’clever and inventive people’ who have made and patented a better drug which will provide treatments to thousands who cannot currently afford commercially available hepatitis C drugs. ’I would call this second generation PEGylation,’ he told  Chemistry World. 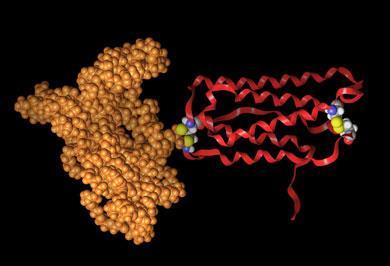 Pegylated interferon: a ribbon protein with a polymer linked by a bridge between two multicoloured cysteine residues

’PEGylating proteins is tricky as most conjugations are formed with amine residues on the protein and are plagued by competitive reactions and loss of protein function,’ explained co-author  Steve Brocchini, a chemist at the London School of Pharmacy, UK.

’One way around this is to engineer a free cysteine into the protein and conjugate PEG to that, but this can also cause problems. We have shown that it’s possible to open an accessible disulfide bridge and re-bridge it, attaching PEG to this new bridge. This can be done efficiently, with much less reagent and without losing any protein function.’

This new controlled reaction method produces a homogeneous product which Shaunak says is in fact a better drug than those currently available. The next phase of development will take place in India, where there is specific need for this treatment.

’170 000 people worldwide currently have this disease and many of them cannot afford the available drugs. We have provided something cheaper and better that we can make available on the market within three years,’ said Shaunak.

There is a great sense of urgency in India about this disease,’ added Brocchini. ’We approached the Indian research group and suggested that they utilise this technology to create a drug that is valuable for their population. The country will benefit from the development of the drug and we will benefit from the knowledge that we gain from the work carried out.’

The technology has been patented and is being developed by a spinout company called PolyTherics. ’This technology could be used to develop other drugs,’ said Brocchini. ’We are very keen to keep this new innovation in the UK.’