A container that holds water without touching it could become reality with the development of a perfectly hydrophobic surface.

Imagine a container that can hold liquid without actually touching it. Just such a container could soon become reality following the development by two US chemists of a perfectly hydrophobic surface.

Thomas McCarthy and Lichao Gao from the University of Massachusetts, Amherst, were investigating the hydrophobic properties of silicon compounds known as methylchlorosilanes. After studying various different varieties, they discovered that MeSiCl3  could, under certain conditions, form a highly hydrophobic coating on silicon wafers.   1 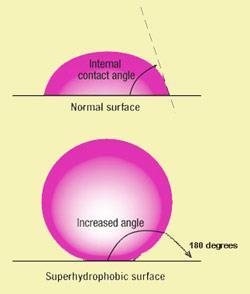 The researchers recorded the interaction between a supported droplet and the coated surface. This showed that the droplet had absolutely no affinity for the coated surface, which indicates a contact angle of 180?, making it perfectly hydrophobic.

To generate this coating, McCarthy and his team had to dip the silicon wafer into a mixture of MeSiCl3 and toluene, and then rinse it with toluene, ethanol and water. This promoted the vertical polymerisation of the MeSiCl3 to form a toluene-swollen 3D methylsiloxane network, which collapsed to form a hydrophobic coating of cylindrical fibres (around 40nm in diameter) when rinsed with the ethanol.

’This is a real breakthrough in the research of superhydrophobicity,’ said Manoj Chaudhury, an expert on surface chemistry at Lehigh University, Pennsylvania. ’The method is very appealing because of its simplicity and it is expected to find real technological applications in various coatings industries.’

McCarthy and Gao are already looking to apply this coating to some of their related research projects, such as the development of water-repellent fabrics.2