A new replication method has been developed for producing thin porous microfluidic chips.

Rob Lammertink and colleagues at the Universityof Twentein Enschede, the Netherlands, have developed a new replication method to make thin porous chips. 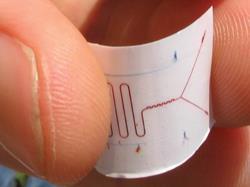 A thin chip with tunable porosity

The porosity of the film can be tuned by controlling the conditions of the phase separation process. ’Depending on the targeted application, channel walls can have micron sized pores down to nanopores or even dense skins,’ said Lammertink.

Introducing porosity into the chip enables the selective transport of chemicals in and out of the channel. It is exploiting this principle that will open up new possibilities for on-chip integration of chip functionalities.

In addition to producing porous, flexible microfluidic chips, the technique offers other advantages such as the possibility of using many different materials and that the process is simple and cheap.

The group believe their technology will be utilised particularly for single-use applications but given the possibilities of preparing chips with potentially very different porosities, the applications could be wide ranging. ’We have only just started exploring some of them!’ said Lammertink.