While physicists struggle to make the first practical quantum computer, nature is full of them. According to theoretical chemist Graham Fleming of the University of California at Berkeley and colleagues, photosynthesis achieves its formidable efficiency by conducting a quantum-computing search algorithm. This process finds the best route for shifting energy from light-absorbing molecules to the photosynthetic reaction centre, where it is used to drive chemical reactions.

The researchers came to their conclusion after studying the photosynthetic complex of the green sulfur bacterium Chlorobium tepidum, an assembly of pigment molecules (chromophores) and protein chains that is simpler than the corresponding unit in green plants but probably operates along similar lines. 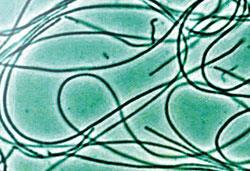 Previously, scientists assumed that the light energy - in the form of excited molecular electronic states called excitons - finds its way to the reaction centre via random hops between chromophores with successively lower energy levels, like a stream of water meandering downhill. But Fleming and colleagues now say that a broader view informs this path: the energy is smeared out over many electronic states in a quantum superposition, in effect being in many different states at once. In this way it ’samples’ the routes available to it, and finds the path of least resistance. That may account for why this part of the photosynthetic process, in which light energy is converted into chemical energy, is so efficient: typically 95 percent or more of the absorbed energy is funnelled to the reaction centre.

To probe the light-harvesting process, Fleming and colleagues used a series of laser pulses to stimulate energy adsorption and transfer in the bacterial photosynthetic complex. ’We shine three laser pulses from three different directions on the sample, and then a fourth pulse is generated within it and emitted,’ said Fleming’s colleague Gregory Engel. ’In effect, the first two pulses create an excitation and the third and fourth (the emitted pulse) report on where the energy has moved some time later.’

The emitted pulses showed that the excitons are being excited coherently, so that their energy was shared out between a superposition of quantum states with the same phase. Quantum coherence is the key to successful quantum computation, because the superposition of many quantum states allows many calculations to be performed simultaneously.

Although previous theoretical work has suggested that such coherence might arise in photosynthetic complexes, it persists here for much longer than expected: at least 660 femtoseconds (660x10-15 s). During this time, the energy ’feels’ the complex’s energy landscape in a manner analogous to a quantum search algorithm that has been proposed for rapid database searches.

’This result was completely unexpected,’ said Engel. ’Wave-like energy transfer has been neglected in all common photosynthetic models.’ He thinks that the results suggest ’a new way to think about the design of artificial photosynthesis.’