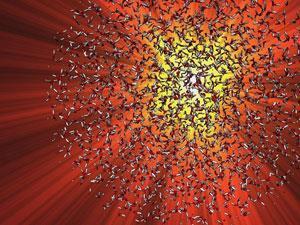 A way to boil water in less than a trillionth of a second has been devised by researchers from Germany. The approach, which is still theoretical, uses a concentrated pulse of terahertz radiation to raise the temperature of a small sample of water by around 600°C. This technique offers the possibility to initiate thermally-activated reactions at precise times, and so better follow and understand them.

In their study, Oriol Vendrell and his colleagues from the DESY Center for Free-Electron Laser Science use molecular dynamics software to simulate the effects on water of a flash of terahertz radiation – a type of electromagnetic wave with frequencies between those of infrared light and microwaves. This radiation can be created by a free-electron laser, in which electrons, accelerated to near the speed of light, release photons as they wiggle through an array of magnets with alternating polarities. The team’s simulation showed how terahertz pulses generate strong electric fields that polarise the water molecules, altering the strength of their hydrogen bonds and immediately setting the individual molecules in motion. This creates what Vendrell describes as ‘a transiently hot and structureless environment’.

Vendrell’s superfast boiler would only be able to heat a nanolitre of water at a time though, and the hot cloud of molecules created would last for less than a millisecond. This, however, is still more than adequate for use in a wide variety of experiments studying thermal reactions. One promising application, for example, lies in the potential for synchronising the terahertz heating pulse with probing x-ray flashes. This would let researchers monitor the progress of an ongoing reaction after well-defined periods of time have elapsed.

‘Most chemistry of importance to nature and society occurs through thermal processes, whereas currently nearly all ultrafast initiations of chemical reactions are triggered by optical excitations,’ explains Anders Nilsson, a researcher at Stanford University, US, who was not involved in this study. ‘Here, the authors show through molecular simulations that [terahertz] excitations can induce hydrogen bond breaking in water by affecting the essential low energy vibrations that are accessible by thermal energy. With the development of new x-ray sources to probe matter on ultrafast timescales this opens up alternative avenues to stimulate chemistry.’

Having concluded their initial simulations, Vendrell and colleagues are now moving to test their method experimentally. They will be investigating both the effects of terahertz pulses on small molecules dissolved in water and the potential for using the radiation to initiate simple chemical processes, such as bond breaking.