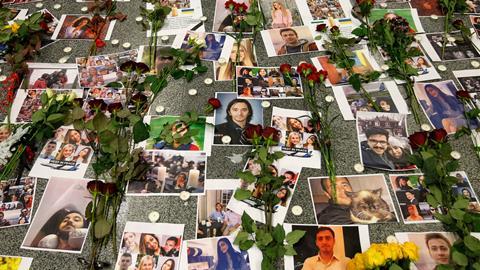 Dozens of scientists and graduate students from universities across Canada perished in the Ukrainian Airlines flight that was en route to Toronto before being shot down shortly after taking off from Iran.

Sixty-three of the 176 people aboard the flight were Canadian. The nation’s academic community was particularly hard-hit. The University of Alberta in Edmonton lost eight current science faculty and students, among them two newly-wed computer science graduate students who were returning to Canada after their wedding in Iran. Six University of Toronto science students also died – five PhD candidates and one undergraduate – and Western University in London, Ontario lost four chemistry and engineering graduate students.

Five University of Windsor community members, including a biology research assistant, three engineering doctoral candidates and one of their husbands, were also aboard the ill-fated plane, as well as three science students at the University of Ottawa. Other passengers on the plane – which Iranian President Hassan Rouhani eventually admitted had been brought down by an Iranian surface-to-air missile ‘due to human error’ – were two PhD students at the University of Guelph, two from George Brown College in Toronto, one engineering instructor from Centennial College in Toronto and one student from Langara College in Vancouver, British Columbia.

‘Canada’s universities join in mourning the Ukraine International Airlines Flight 752 crash victims,’ said Universities Canada, which represents the country’s universities and colleges. ‘We are deeply saddened by this loss of life and potential. Universities across the country are working to support the families and friends of those who perished, many of whom were students, faculty and others connected to the university community.’

The deaths illustrate the fact that top scientists and engineers from Iran have been increasingly gravitating toward Canada in recent years.

‘This incident is a huge loss for Canada but it warns us about a bigger loss that Iran is experiencing,’ says Kaveh Madani, an Iranian environmental scientist and senior fellow at Yale University. ‘If the passengers of this plane constitute a sample of the brains Iran is losing, we must seriously worry about the future of Iran,’ adds Madani, who is also a visiting professor at Imperial College London. ‘This is a major loss of human capital for Iran.’

Canada has become a particularly attractive destination for Iran’s best and brightest young people in recent years, according to Nina Fedoroff, a molecular geneticist at Pennsylvania State University who served as a science and technology adviser to Hillary Clinton during the Obama administration, and Condoleeza Rice under the previous US president George W Bush. This is because, in part, the country has been more open to highly educated immigrants from Iran and the Middle East than other nations popular among international academics, especially the US.

Iran is one of five Muslim-majority countries whose citizens have restricted entry into the US under President Donald Trump’s so-called ‘Muslim ban’, although it exempts Iranians on student visas. Significant uncertainty still exists, however, around US visa rules for many in Iran and other Muslim nations.

‘I believe that Canada will continue to benefit from Iran’s human capital and perhaps they deserve this, given their commitment to an immigrant-based growth model,’ Madani says.

The number of Iranian students in Canada has grown significantly in recent years. There were nearly 11,000 Iranians studying in Canada at the end of 2018, up from just over 4500 in 2015, according to the Canadian Bureau for International Education. Meanwhile, the US State Department’s visa data shows the number of Iranians studying in America is falling. The number of student visas issued to Iranian nationals fell from nearly 3600 in 2017 to about 2300 in 2018. The State Department explains that the ’existing information-sharing deficiencies’ with Iran means those nationals are subject to enhanced vetting.