Chinese scientists have used polymers nanobrushes to ’paint’ a 3D representation of Leonardo da Vinci’s masterpiece, the Mona Lisa. The quick, low-cost technique that takes advantage of the spacing between polymer nanobrush arrays, could lead to advances in technologies ranging from computer chip fabrication to stem cell research, they claim. 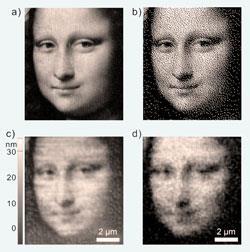 Surface patterning is important in many areas of science, including the design of electronics and medical devices. Polymer nanoarrays can be easily fabricated in 2D, but in order to make more intricate devices for use in bioengineering, 3D structures are necessary. However, forming these is more challenging.

Now, Zijian Zheng and colleagues at the Hong Kong Polytechnic University have developed a simple way to produce 3D polymer structures and used it to make an image of the Mona Lisa out of polymer nanobrushes.

Zheng explains that the most significant discovery is that the spacing between the nanobrushes controls the morphology of the structure. ’When the neighbouring nanobrushes are close enough, the height of the brushes is a function of the distance between them as a result of the interaction between the polymer chains,’ he says. ’One can fabricate any 3D morphology by carefully designing the positioning of many smaller nanobrushes within an array.’

To make the image of the Mona Lisa, they created a template by converting a greyscale image of the picture into a bitmap image. Where a white pixel appeared on the image, a nanobrush building block was attached to the substrate. The black pixel areas were left vacant to serve as spaces. Where large spaces existed between the nanobrushes, the polymer chains did not polymerise further, but nanobrushes separated by smaller spaces interacted with each other to form denser 3D architectures.

’The most significant development in my view is the bitmap-converting method employed to fabricate 3D polymer structures of great complexity, which is comparable to a "coarse grain" procedure utilised by computer simulators,’ says Wuge Briscoe, an expert in the interactions between surface-grown polymer brushes, at the University of Bristol, UK. ’It is conceivable that in areas where such surface patterning is of importance, such as cell adhesion and biosensing, this method would offer tremendous potential,’ he adds.