Haemocompatible and shape-memory polymers the future of stents

US scientists Wendy Crone and Kristyn Masters, of the University of Wisconsin-Madison, and Ken Gall, at Georgia Institute of Technology, hope their new haemocompatible and shape-memory materials will allow stents to be made entirely from polymers.

Currently, most stents are metal frames coated with polymer. The coating releases drugs to stop blood clots and scar tissue from re-blocking the artery. But sales in the worldwide $5 billion market for stents have slowed this year following concerns over their long-term safety. In December 2006, the US Food and Drug Administration (FDA), held hearings on reports of drug-eluting stents being associated with blood clots and increased risk of heart attack.

Aside from possible side-effects of internal drug release, one problem may be that a polymer coating can hold only a limited dose of anti-clotting drug. The coating may also wear away inside the body, exposing the metal inside.

Now Crone and Masters have created a new rubbery polymer that wards off blood clots without the need for extra coatings or drugs and also helps endothelial cells, found on the insides of arteries, to grow. ’The material looks exceptionally promising for a number of biomedical applications,’ said Crone, including vascular grafts, tubing materials, and stents.1 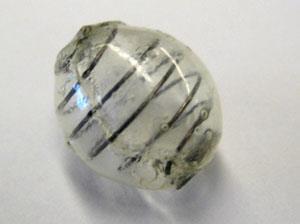 As Crone explained, the polymer was created by co-polymerising polyurethane with hyaluronic acid (a glycosaminoglycan found in many body tissues). This strategy directly incorporates a biological component into the polymer backbone, avoiding the need for any coatings or drugs. Hyaluronic acid is soluble only in water; so to polymerise with polyurethane, it had to be degraded by an enzyme and modified into a salt that was soluble in dimethylformamide. The co-polymer’s stiffness can also be tuned according to the amount of hyaluronic acid added.

The team are now testing their polymer in pigs and rats. First applications are likely to be a new way to treat brain aneurysms - caused when blood vessels balloon due to a weakness in the wall of an artery or vein. The polymer, shaped by an internal coil, would plug the balloon like putty, and encourage cell growth to fill the gap, but at the same time prevent blood clots.

Gall, on the other hand, is tackling a second problem with polymer-coated metal stents. The implants are not very flexible and can stress the artery wall - perhaps another factor in their poor performance. Metal coils expand into shape inside arteries, but Gall says all-polymer stents can be designed to be far more flexible and easy to deliver. He is creating shape-memory polymers which pack tightly at room temperature, but unfurl to a required shape at body temperature in blood vessels.

Gall is building up a systematic library of polymer mixtures, showing that any required combination of strength, stiffness, and rate of unfurling can be chosen depending on the degree to which polymers are cross-linked.2 Though his systems are further away from animal testing, he believes that they, like Crone’s and Masters’ new polymer, represent a safer future for medical implants.