Arrangements of chunks of permanent magnetic material that can be tweaked to give strong, uniform fields could open the door to more sensitive and higher resolution portable nuclear magnetic resonance (NMR) spectrometers, say researchers in Germany.

Federico Casanova and colleagues at Aachen University constructed their magnet from a ring of trapezoidal chunks of samarium cobalt, with rectangular chunks sandwiched in between that can slide in and out. This allows them to smooth out or ’shim’ the magnetic field inside so that it gives a good quality NMR spectrum. ’If one of the magnets is stronger than average it can be moved outwards, if another is weaker you move it inwards, and so on,’ explains Casanova.

Most modern NMR spectrometers are based around superconducting magnets, but these need to be surrounded by bulky shielding jackets, cooled with liquid helium and liquid nitrogen. There are compact benchtop instruments available using permanent magnets, Casanova explains, but they tend to have weak fields and use much bigger magnets, stabilised with iron. 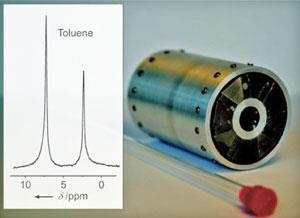 The problem is, says Casanova, as magnets get smaller, the field they produce is less uniform. In the past people have got around this by using small sample volumes, reducing the volume over which the field need to be homogeneous. ’But the combination of low field and small volume gives orders of magnitude lower sensitivity,’ he adds. ’The beauty of our magnet is that it is small, but the volume is same as superconducting machines.’

’I think this new magnet design is a very exciting development,’ says Barry Jones from UK based Oxford Instruments, which makes a range of benchtop NMR equipment. ’It opens up the possibility of offering some of the performance of high-field superconducting systems in a robust desktop configuration more similar to that of the current low resolution instruments. This could open up a whole new market area for NMR instruments in industrial quality control and process monitoring, and in simple organic chemistry research or teaching.’

Casanova agrees that the possible applications are exciting, ’You could use it to monitor reactions in real time, by pumping them through the spectrometer - for example if you have dangerous chemicals you can monitor it inside the fumehood.’ However, he admits that there are a few technical hurdles to overcome before the magnet can be converted into a commercial spectrometer. For example, the field of permanent magnets is susceptible to temperature. ’We’re working on ways to actively lock the field and correct for temperature drift,’ he says.