If he can understand how a certain class of proteins work, Tom Muir could unlock the cures for numerous diseases. He tells Joanne Thomson why he is inspired, not scared, by the complexity of the task ahead 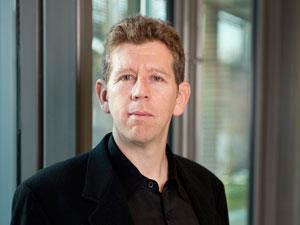 Tom Muir, professor of chemistry and molecular biology, Princeton University, US, is an expert in protein engineering and its application to studying cellular signalling networks. His lab has developed a suite of chemistry-driven tools for studying the structure and function of proteins in the test tube and in live cells. In addition, his laboratory employs cutting edge methods in protein engineering (computational protein design and directed evolution), structural biology (NMR spectroscopy and x-ray crystallograghy) and cell biology (imaging).

What led you to a career in science? Were you interested in science from an early age?

I would be lying if I said I was deeply passionate about it when I was in high school, but I could always do it and it was the path of least resistance into university. It was when I got to university that I first realised that I was lucky enough to have chosen a major that I really liked. I made some great friends and we collectively discovered the subject together. I loved the logic of chemistry.

You studied for your undergraduate degree and PhD in Edinburgh. How did you find the move to the US? What do you think are the main differences between practising science in the US and the UK?

I knew within weeks of arriving in the US that I was never coming back. I loved it! I moved to Southern California and, as someone coming from the west of Scotland, I found it quite agreeable. I was at The Scripps Research Institute in La Jolla when I was a post doc and the sense of anything’s possible in science there was pervasive and infectious; the penny truly dropped in terms of what it means to be a research scientist. The ‘can do’ attitude that I experienced knocked me out. Sitting on the beach didn’t hurt either!

You started out as an organic chemist, but your work now combines chemistry with biochemistry and cell biology. How did you make the transition into this interdisciplinary research area?

The move to chemical biology wasn’t part of a grand plan. I have always felt like I am on a boat being blown in different directions on a lake. Mainly, I’ve been very lucky in the people that I have interacted with, both mentors and collaborators.

I have to thank particularly my PhD supervisor at Edinburgh, Bob Ramage, who is an amazing organic chemist and whose approach to the subject was rigorous and forward looking. He appreciated just how much more chemistry had to offer biologists, molecular biologists specifically, and he set up the post doc position for me in San Diego. I worked with Stephen Kent, who was also an amazing mentor, and I was fortunate to be in his lab during a critical period in the development of modern protein chemistry. As I learned more about biology, I absolutely bought into the importance of chemistry in solving much more complicated biological problems.

Then I moved to Rockefeller as an assistant professor. Rockefeller has many amazing biologists, probably unequalled. I had the opportunity to talk to all these luminaries and they introduced me to problems that I hadn’t even thought about. They once again highlighted the huge role that chemistry has to play, opening new doors for me.

Your research revolves around proteins and how they work. What is it about this particular type of biomolecule that fascinates you?

I am staggered by how byzantine they are. They are incredibly complicated machines. It is almost like peeling back layers of an onion: you think you understand one layer and you peel it back and there is a whole other layer of complexity underneath. With each layer, you get closer and closer to physics. It always amazes me how complicated their regulation is, how many different ways they can be controlled and how many different types of chemistry they have evolved to catalyse reactions and to recognise other types of biological molecules. But I’ve always thought of them as big organic molecules and therefore it seems natural to me that organic chemists should be studying them.

Have you never found their complexity daunting?

I always find it daunting, but I think tackling daunting tasks is exactly what academics should be doing. It is easier, because it is safe, to work on problems that are in a sense crumbs off the big table. But chemists should have a chip on this table, we should be working on problems that make us throw our hands in the air and shout ‘I’ll never figure this out!’ We have to try. At some point, everything was daunting until someone figured it out. I am not saying that I am going to be the one to figure out say epigenetics, but if nobody tries, it will forever remain a mystery. Yes, I feel daunted but that inspires, rather than scares, me.

Which aspect of your research are you most excited about?

I am really passionate about my work in chromatin biology, where we are trying to make modified forms of the packaged genetic material that is found in cell nuclei. We want to understand how changes to this material (other than changes to the DNA sequence) – so called epigenetics – affect how information is stored, retrieved and transmitted in biology. I think this is one of the last great unsolved molecular biology problems. It touches on not just how we are what we are, but also many diseases. Epigenetic misregulation underlies many cancers and autoimmune diseases, so understanding how it works is important both from basic science and applied science perspectives.

Many people are now beginning to appreciate this; most big pharmaceutical companies now have epigenetic programmes. My own view is that we still need to have a lot more basic understanding of the science before we can make the best drugs in this area. I am not saying people should stop trying to make drugs right now but the more you know about the basic science, the better the chance you have of fixing the problem.

In its first 10 years, my lab was focused on developing general tools for protein engineering. We were fortunate enough to develop some tools that are actually very useful, but a few years ago I made the risky decision that we were going to stop tool development for the sake of it. Rather, I wanted to work on a big biological problem since I felt that this was more interesting in the long term. Any young person leaving my lab gets that advice: pick a problem in biology rather than a technique.

Aside from your own research, what is hot in chemical biology?

Neuroscience is the other great unknown area and it offers tremendous opportunities for chemists. Understanding how the various membrane proteins and channels work, how they are regulated and how information flows at a systems level are all really interesting. Chemists don’t want to miss this boat.

I also think there is a lot of interest in the microbial world, particularly communication between bacteria themselves and also between bacteria and animals. Quorum sensing is really exciting.

But for me, epigenetics is the big one – one that needs to attract more chemists’ attention.

How is the difficult global financial situation affecting research in the chemical sciences in the US?

The funding in the US has been in decline for a few years. It is now very hard to get grants, particularly if you are young. And it is not just the lack of funding – it is getting increasingly difficult to find jobs for the people we train. There are fewer jobs around and, as a consequence, there are more and more people getting caught in this netherworld between being a student and getting a real job, the netherworld being stuck in never ending postdoc positions. The longer they are in this netherworld, the less likely it is that they are going to get jobs unfortunately. It’s rough out there.

What advice do you have for these scientists?

Young people that are the most passionate and best at science will continue to do it; the best ones will find jobs. The people in the tier below are the ones that I worry about. I’ve always believed if you do good science, things will work out for you; that has certainly been my experience. So if you really want to do it, obviously be guided by the science and do your homework. Think about who you want to work with. Look at the track record of the lab head at placing people in jobs. Did the post docs go and do another post doc? Have they found real jobs? These have always been important considerations but even more so now.

Tell me a little known fact about yourself

I must be one of the few chemical biologists around who has never taken a real biology course in their life!

How would your colleagues and friends describe you?

He is sometimes inscrutable but on his good days, he is fun to hang out with.

You can’t be inscrutable and answer this question.

Unemployed! Growing up, I was just really lucky to have a talent in something so there really wasn’t a plan B for me. But I would love to be writer.