Organic polymers can use a quantum effect to rapidly shuttle light energy along their chains, even at room temperature, Canadian researchers have discovered. The effect appears to depend on the polymer’s structure - and if harnessed in applications, could lead to organic solar cells that transfer energy more efficiently, they say.

Greg Scholes and Elisabeth Collini, from the University of Toronto, investigated energy transfer in a derivative of the conjugated polymer poly (p-phenylenevinylene). When photons strike these polymers, they liberate electrons in the material, to create an exciton - an excited electron-hole pair. This electronic state moves along the conjugated polymer chain, transferring the energy delivered by light.

In inorganic silicon, this process quickly leads to a photovoltaic current, because mere thermal energy is enough to separate electrons from their holes, creating a free flow of electrons. In organic polymers, however, the excitons are more tightly bound together. But it is still possible to separate them, at interfaces between electron donors and electron acceptors that are engineered into organic solar cells. However, excitons must migrate fast enough along the chain to reach such an interface without decaying in some unwanted way - for example, reversing their formation and giving out light.

’One of the biggest obstacles to organic solar cells is that it is difficult to control what happens after light is absorbed: whether [you want to] transmit energy, store information or emit light,’ explains Collini.

The researchers had thought excitons would have to hop randomly between subunits of the polymer chain. But in some cases, it appears, energy provided by light can shift along the polymer much faster. This happens when excitons demonstrate quantum coherence: that is, their energy is smeared out simultaneously over many electronic states whose wavefunctions all have the same phase, in a quantum superposition of states. By sampling all these states at once, the exciton can glide between subunits of the polymer, finding the most efficient path. 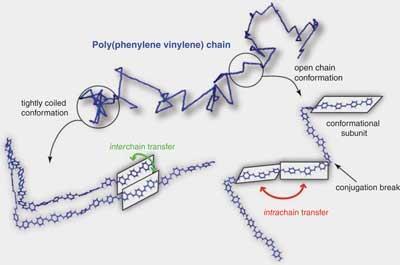 This effect has been observed before in photosynthetic complexes that shuttle light energy - and also in conjugated polymers. But surprisingly, Collini and Scholes say they have spotted it working at room temperature.

’We designed our experiment to look for [the quantum coherence] but we were not expecting to see it,’ says Collini.

To demonstrate the coherent energy transfer, the researchers directed an ultrashort laser pulse at the polymer, thus bringing it into a superposition of the ground state and a photoexcited state. If the polymer was dissolved in chloroform - and its chain therefore open and extended - Scholes and Collini found, using further ultrashort probing pulses, that excitons moving along the chain remained in a coherent state up to 250 femtoseconds, enough time to move over some five to ten monomer units.

’The chemical framework that makes up the chain is a crucial ingredient for enabling quantum coherent energy transfer,’ Scholes says. For if the polymer was tightly coiled on itself rather than extended, the researchers found, excitons tended to hop across parallel chains, and no coherent transport was observed.

The discovery could open the way to improved organic solar cells, comments Robert Silbey of the Department of Chemistry at the Massachusetts Institute of Technology. ’You can make excitation transfer faster in these systems by inducing structures that allow this coherence, and increase the efficiency of such devices,’ he says.

Collini could not quantify the improvement in energy transport along the polymer, but said it would be ’quite drastic’. In the meantime, the researchers will look for coherence in other organic systems. ’We want to verify if this effect only happens in polymers,’ she says. And they will move quickly to investigate applications: ’We are planning experiments with polymer films which are more applicable with devices.’