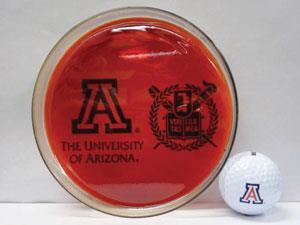 The copolymer can be formed into a glassy film

A single-step process to copolymerise elemental sulfur – a by-product of petroleum refining – converts this cheap and abundant resource into novel and useful copolymers. Dubbed inverse vulcanisation, the key feature of this method is the direct polymerisation of divinylic monomers with liquid sulfur to form copolymers with the enhanced thermomechanical and electrochemical properties of sulfur. The simple preparation means these copolymeric materials can be readily turned into high capacity cathode materials for lithium-sulfur (Li–S) batteries using imprint lithography.

Although elemental sulfur is noted for its high electrochemical capacity and refractive index, copolymerising it into a useful, workable material has met with little success. ‘Sulfur exhibits limited solubility or miscibility in the vast majority of conventional organic substances,' explains Jeffrey Pyun, University of Arizona, US, part of the team behind the new work. ‘To circumvent this challenge, we chose to conduct this new chemistry entirely in liquid sulfur as both the solvent and the reactive medium.’

Elemental sulfur primarily exists as eight-membered rings that, when melted, open to form chains whose diradical ends link up into linear sulfur polymers. But these polysulfanes are often chemically unstable and readily depolymerise back to the monomer rings. Using liquid molten sulfur as both the solvent and reactive medium however, the team could directly copolymerise the free-radical chains with the divinyl monomer 1,3-diisopropenylbenzene (DIB) without the need for additional initiators or organic solvents. 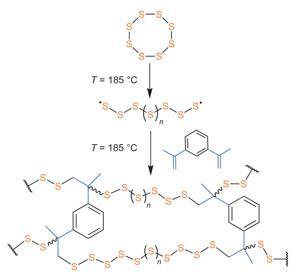 The sulfur copolymer can be synthesised in a simple, one pot process

‘We chose DIB because the liquid monomer is thermally and chemically stable at the polymerisation temperatures used in this process and is fully miscible in liquid sulfur,’ Pyun says. The result was a stable copolymer whose thermochemical and optical properties could be tuned by varying the amount of DIB added during the elemental sulfur melt–copolymerisation. Unlike traditional vulcanisation, where sulfur forms crosslinks between polydiene chains rather than the comonomer itself, the high S–S bond content in inverse vulcanisation means that the electrochemical properties of the final polymeric material are superior to elemental sulfur.

Pyun believes this kind of simple, but useful, chemistry will have a huge commercial impact, not least in the development of next generation lithium-sulfur batteries. One potential advocate is David Ainsworth, chief technical officer at Oxis Energy, UK, where pioneering work is currently ongoing on Li–S battery technology for electric vehicles, defence systems and portable electronic devices. ‘The initial cell cycling results look promising,’ he says. ‘It is very interesting as it represents a unique way of thinking with respect to sulfur based cathodes.’