Forensic analysis of paint scraps dates picture to before, not after, the Sistine Madonna

Forensic scrutiny of flecks of paint from an unattributed painting lends weight to the idea it was a mock-up for one of Raphael’s most famous Renaissance creations.

An unattributed portrait of the Madonna and Child known as the de Br?cy Tondo bears an unmistakable resemblance to the central figures in the Sistine Madonna by Raphael. But which came first? This question has occupied art historians and scientists for more than 25 years. 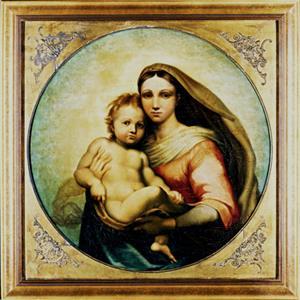 The de Br?cy Tondo: a Renaissance Madonna and Child attributed to Raphael, ca. 1512

The latest piece of research on the provenance of the de Br?cy Tondo is consistent with the tantalizing possibility that it is not a copy but a dummy-run for Raphael’s painting now hanging in a gallery in Dresden, Germany.

Laser Raman spectral analysis of three flecks of paint taken from the de Br?cy canvas reveals the unknown artist used a lead-based yellow pigment called massicot (lead II oxide), says Howell Edwards, head of the Division of Chemical and Forensic Sciences at the University of Bradford, UK. This is typical of the Renaissance period and it fell out of favour it in the early 17th century, he said. ’There’s historical evidence that massicot was one of the pigments used by Raphael himself.’

Raman analysis is a very good technique for detecting pigments, confirmed Marika Spring of the science department at the National Gallery in London. Using scanning electron microscopy/energy dispersive x-ray microanalysis, she and her colleagues identified another yellow - lead-tin yellow - in some of Raphael’s paintings at the gallery. But, she said, it is perfectly possible that he was also using other yellows. ’Raman is the only thing that can pick up massicot,’ she said.

There is further evidence to suggest this is more than just a copy of the Sistine Madonna. Most notably, as the painting has aged, a miniature sketch of the composition has become visible beneath a furl of the Madonna’s scarf. ’With a copy you would never get this underdrawing,’ said Alan Ward, a spokesperson for The de Br?cy Trust, which owns the painting.   ’It’s undoubtedly an original in some form,’ he said.

Further research could confirm it. But, said Edwards, it’s unlikely there will ever be conclusive proof that Raphael was the artist. ’The more evidence one gets about it, the more firm the conclusions that can be drawn,’ he said.