Scientists in Canada have made nanoparticles that release singlet oxygen when a laser beam is shone on them. The nanoparticles could improve the effectiveness of photodynamic therapy.

Under the right conditions, oxygen, light and photosensitiser molecules combine to generate a short-lived poisonous oxygen species called singlet oxygen. This is the basis of photodynamic therapy, a treatment for some cancers. Normally, photodynamic therapy requires oxygen to be present in the target cells; however, tumours often contain much lower oxygen levels than healthy tissues. 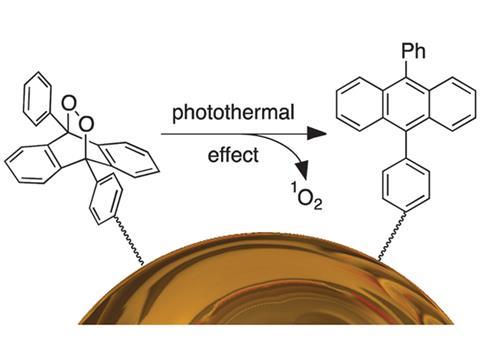 Now, Neil Branda and colleagues at Simon Fraser University have developed a system that does not rely on oxygen being present. The team anchored anthracene endoperoxide ligands onto the surface of gold nanoparticles. Exposing the nanoparticles to pulsed laser light induced a photothermal effect that produced enough heat to break the endoperoxide bonds and release singlet oxygen.

‘This proof-of-concept offers a new way to produce singlet oxygen in a controllable manner,’ says Jianzhang Zhao, who investigates photosensitisers at Dalian University of Technology, China.

Ljiljana Fruk, an expert in the biofunctionalisation of nanoparticles at Karlsruhe Institute of Technology, Germany, says the work is an excellent use of existing concepts in a new way. ‘The ability of gold nanoparticles to produce heat upon irradiation has already been successfully used for cell apoptosis.’

Fruk thinks targeted delivery of the nanoparticles will pose additional challenges but says there are already strategies for directing nano-cargos that could be successfully translated to this system. ‘I believe there will be more interesting things stemming from this work in the future,’ she adds.

Next, Branda plans to make the nanoparticles water soluble and compatible with cellular conditions. ‘We can then test the [singlet oxygen] release in cultured cells prior to the long term goal of testing in tissue and animals.’