Porous organic polymers can be tailored to filter the air for toxic compounds, and don’t degrade in moist or corrosive environments

The filters used in gas masks, which give protection against toxic industrial chemicals, are often large and cumbersome, being made from activated carbon that is impregnated with metal salts. In a search for alternatives, SonBinh Nguyen and colleagues at Northwestern University, Evanston, Illinois, have joined forces with scientists at the Edgewood Chemical Biological Center, Maryland, to investigate a series of porous organic polymers (POPs) bearing metal-catecholate groups. By changing the molecular components used in their synthesis, the materials have been tailored to hydrogen bond to, and consequently eliminate, specific toxic industrial chemicals, like ammonia.

‘Metal-organic frameworks (MOFs) have the same customisable characteristics as POPs, and have been investigated for their ability to remove toxic chemicals,’ says Nguyen. ‘Yet many of the MOFs known today are not very stable, owing to the prevalence of metal-oxygen bonds, and will degrade in the presence of atmospheric moisture. POPs, on the other hand, contain carbon-carbon bonds, which are less susceptible to moisture attack,’ he explains. 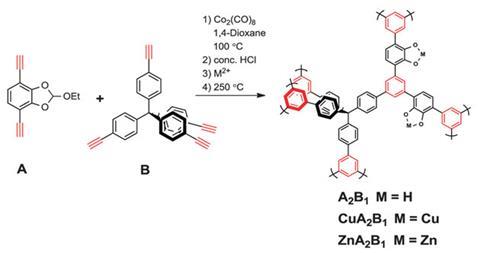 Hani M. El-Kaderi, of Virginia Commonwealth University, Richmond, Virginia, US who designs porous polymers for a variety of applications, applauds the way the new POPs were fabricated to ‘specifically address the chemical-stability limitations encountered for metal-organic frameworks… without compromising gas uptake under practical settings.’

Organic materials scientist Neil McKeown, from the University of Cardiff, adds that Nguyen’s study demonstrates the potential of microporous polymers to adsorb toxic chemicals from air. ‘This synthetic versatility may ultimately result in polymer adsorbents that are better than the present state-of-the-art activated-carbon materials, for specific target chemicals.’ he says.

Nguyen is excited about the future for POPs, speculating that any chemical can be filtered from the air providing the proper chemistry is incorporated into the structure. ‘Porous organic polymers… can have large surface areas, making them suitable for gas storage, or unique chemical motifs tailored toward light-harvesting applications, chemical separations and catalysis,’ he says. ‘The challenge now is to merge these highly desirable features together to generate robust, tunable materials that can be tailored for different applications.’