Chemists in the UK have figured out how to convert pure proteins into a liquid state, without any solvent

The transparent red, viscous liquid made by chemists at the University of Bristol, UK, may look like warm treacle, but it’s something far stranger: the first known example of a liquid protein. Adam Perriman, Stephen Mann and their colleagues, in collaboration with Helmut C?lfen of the Max Planck Institute for Colloid and Interface Research in Golm, Germany, have figured out how to convert pure proteins into a liquid state, without any solvent.1

Their technique seems quite widely applicable - so far they have made liquid forms of the iron-storage protein ferritin, the oxygen-carriers myoglobin and haemoglobin, and the enzyme lysozyme. Mann foresees a host of possible applications: protein-based coolants and lubricants, high-potency pharmaceuticals, and media for making functional nanodevices using solvent-free ’green’ methods.

Ordinary proteins don’t form liquids. When crystalline proteins are heated, either they sublime (move straight into the vapour phase) or the molecules themselves break apart or lose their compact shape. But Mann and colleagues borrowed a trick pioneered by Emmanuel Giannelis of Cornell University for making liquids from nanoscale particles. The key is to give the interactions between particles a longer reach, similar to the size of the particles themselves. Giannelis and colleagues achieved this for metal nanoparticles by attaching polymer chains to their surfaces, which can ’feel’ one another over distances comparable to their length.2

The Bristol team figured that the same approach might work for proteins too. To the surface of ferritin - a roughly spherical protein made of 24 separate chains or subunits and measuring about 12 nm across - they attached about 240 positively charged amine groups. These provided the binding sites for electrostatic attachment of a negatively charged polymer surfactant, creating proteins that bristle with long hairs.

The ferritin-polymer composite forms a solid that melts at around 30?C and does not refreeze until cooled to -50?C. The material doesn’t decompose until heated to 405?C, 90 degrees warmer than pure ferritin. At 32?C the liquid is viscoelastic, so that droplets can regain their shape when stressed and then released. And when viewed under polarised light, it is also birefringent, splitting light rays into two. This implies that the melt is a liquid crystal, having a somewhat orderly orientation of particles. The researchers think that the polymer hairs clump to one side, giving the composite objects an ellipsoidal shape which enables them to become aligned. When warmed to 50?C the birefringence vanishes and the liquid seems to behave like an ordinary fluid, with disorder in the positions and orientations of particles. 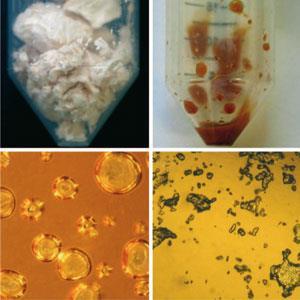 ’The work is quite fascinating,’ says Giannelis. ’It takes our work on oxides and metals in a new direction. I am really excited to see that the concept is quite general and can be applied to a whole different set of materials.’

Since the concentration of liquid protein is much greater than can be attained by dissolving it in water, medically useful proteins could be delivered locally in high doses when in liquid form. Mann suggests that this might lead to ’the development of new wound dressing treatments, where large protein concentrations could be applied in the form of barrier films consisting of melts with controllable properties.’ For example, he says, this could allow oxygen to be delivered efficiently to a wound to promote healing. And enzymes that break apart other proteins could be used to clear wounds of debris from dead cells.

Liquid proteins might be easy to pattern into thin films for making devices such as biosensors. And like other ionic liquids currently used as ’green’ solvents, these protein liquids don’t really evaporate at all. They could thus provide reaction media that combine the attractive solvent properties of conventional ionic liquids with the catalytic functions of enzymes.