Molecule could be used to build tiny electronic devices

Researchers in Europe have found that a molecule can be flipped between two conductance states without changing its shape1. Because naphthalocyanine does not bend or warp like most other single-molecule switches found to date, the researchers hope it can be linked up with others to make tiny electronic devices.

Peter Liljeroth, and Gerhard Meyer of the IBM Zurich Research Laboratory in Switzerland and Jascha Repp at the University of Regensburg in Germany switched the position of the two imino hydrogen atoms on the inner cavity of naphthalocyanine at cryogenic temperatures using the tip of a scanning tunnelling microscope. They found this tautomerisation could be used to toggle the molecule between two states - one with high conductance and one with low.

Crucially, the researchers demonstrated that the molecules - which first had to be adsorbed on thin, insulating salt films grown on single crystals of copper - did not change conformation after the switch. 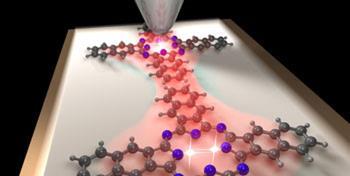 By pushing the molecules into a row with the tip of the microscope, the team were also able to couple two switches together. They found that injecting charge in one molecule induced tautomerisation in its neighbour without any buckling or twisting of the chain.

’Most molecular switches are based on drastic conformational changes in the molecule,’ the researchers say. ’This is not compatible with the aim of controlling coupling between the molecules.’

Commenting on the research, Colin Lambert of the University of Lancaster, UK, told Chemistry World, ’The paper is indeed interesting and novel. An important part of the paper is the comparison between theory and experiment, which seems to confirm the interpretation of the authors.’

Lambert notes that switching in two-level systems has been reported before by a number of groups. ’The main issue is reproducibility and a robust mechanism, which is stable over many cycles,’ he said. ’Only time will tell whether this is a key breakthrough on the road to single-molecule electronics.’