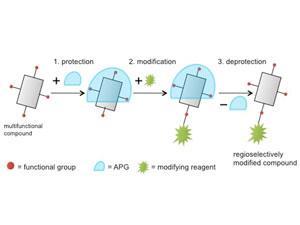 Step aside benzene rings, there’s a new protecting group in town. Dutch researchers have used a strand of RNA to cover portions of a complex small molecule. They then chemically modified a portion of the molecule not covered by the RNA.

Many natural products, like antibiotics, have complex structures and multiple sites with similar reactivities. Chemists who want to modify one of these molecules often alter it using enzymes that selectively change one area of the molecule. Others build the modified molecule from scratch in the lab, controlling which site reacts by blocking the others with protecting groups.

Andreas Herrmann, of the University of Groningen in the Netherlands, wanted a straightforward way to protect complex molecules without the challenge of a multi-step synthesis. He noticed that a short strand of artificial RNA, called an aptamer, binds to an antibiotic and leaves one ring of the molecule uncovered.

This antibiotic, called neomycin B, has six dangling amine groups which all have similar reactivities. That means it would be difficult to modify one amine without first protecting the others in the molecule. But when the aptamer covers the antibiotic, only two amines are exposed.

Herrmann and his colleagues carefully chose reagents to react with each exposed amine. The researchers modified the covered antibiotic – with an acyl group on one amine or a urea on the other – in the desired spot at least 89% of the time.

Altering that portion of the antibiotic normally requires more than 20 steps when building it in the lab. Using RNA as a protecting group, the scientists reduced this long synthetic sequence to three steps: covering the molecule with the aptamer, modifying the molecule and removing the aptamer.

Herrmann thinks RNA aptamers could be a general way to protect small molecules because these nucleic acids can be selected to bind most molecules. Some natural products may be binned during the drug discovery process because they’re too complicated to modify, he adds, so this strategy might help more complex molecules become drug candidates.

Imagining RNA as a protecting group is bold and creative, says David Liu, of Harvard University, US. He notes that RNA is more reactive than traditional protecting groups, which may restrict the types of chemistry that can be performed on an RNA-wrapped molecule. But if pioneering synthetic chemists are willing to try this approach, they may find more reactions are compatible with RNA than they anticipated, Liu adds.

RNA biochemist Jingdong Ye, of the University of Central Florida, US, considers this a ‘remarkably innovative application for aptamers’. For this approach to be general, scientists need to identify and build aptamers that leave a specific portion of a molecule uncovered, he adds.