Mole rats reveal that oxidative stress is only half the story

Researchers in Texas believe naked mole rats may hold the key to healthy aging, after discovering that the long-living rodents are able to maintain protein stability and function well into old age.

Rochelle Buffenstein  and her team at the Barshop Institute, Texas, started studying naked mole rats after noting that the rodent can live for up to 30 years, far longer than the 3 year average life span of a laboratory mouse.

’In most animals you get an accumulation of oxidative damage with age, but with mole rats, young and old animals have the same protein profile,’ Buffenstein told Chemistry World. ’The mole rats have between two to ten times more oxidative damage in all tissues than mice, and yet they live another 26 years with this damage.’ 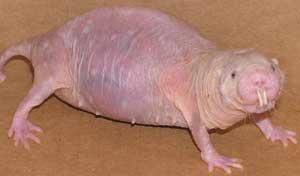 The rats are able to maintain functionality because they effective mop up damaged proteins in cells. For example, Buffenstein found that, in mice, the liver enzyme GAPDH decreased in activity as the animals aged. However, in naked mole rats, the same enzyme maintained its activity over a 24 year life span. The rat’s enzyme was also less likely to unfold in the presence of urea compared to the same enzyme taken from mice.

In the wild, naked mole rats live in underground burrows - the likely reason that the rodent has evolved such remarkable longevity. Their natural habitat is free from both predators and seasonal changes, allowing them to evolve slow reproductive rates without compromising the survival of the species.

The team think the naked mole rats may have developed a special mechanism to maintain the functionality of cell proteins. ’We think that probably the naked mole rat has unique set of proteins that are missing in the short lived animals. Or the short lived animals might have a very low level of those proteins which are decayed during aging,’ says Asish Chaudhuri, who worked on the research.   The team are now trying to identify these sets of proteins or complexes.

’Understanding the mechanisms facilitating this protein homeostasis has tremendous application because if we can figure out how the naked mole rat do it we might be able to figure a way to help humans do it,’ says Buffenstein. ’Maybe it just requires some kind of minor tweaking or overexpression of certain compounds.’

Huber Warner, an expert on aging at the University of Minnesota, says the research will encourage researchers to look at aging in a different way. ’Obviously damage is not enough to shorten lifespan and this paper adds a little bit of evidence to the question, "What should we be looking at?".’

’Oxidative damage is not the be all and end all of aging. It’s rather tolerance to damage and finding ways to cope with those stresses without impacting on functionality that are more important,’ adds Buffenstein.