Scientists in Singapore have prepared a coating for metals that heals itself after being scratched to prevent corrosion of the metal underneath.

Unlike other examples of such coatings, this one, developed by Mingxing Huang and Jinglei Yang of Nanyang Technological University, requires no catalyst and can be used at 40 degrees Celsius.

The team prepared the coating by encapsulating the highly reactive compound hexamethylene diisocyanate (HDI) inside polymer shells to form microcapsules. They then dispersed the microcapsules into epoxy resin and applied this coating to steel. When the coating was scratched, the punctured microcapsules released the HDI, which reacted with water to form polyurea and this sealed the damaged region. ’What’s more, HDI microcapsules can also trap and react with the water diffused into the coating, providing another way to retard the corrosion process on the undamaged coating,’ says Yang.  ’There are a few studies reporting that the annual cost of corrosion is roughly 1-5 per cent of each nation’s gross domestic product in the US, Japan, China and Europe. It’s a huge number,’ he adds. 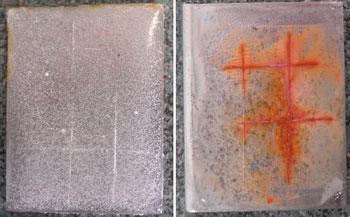 However, both the authors and materials expert Fred Wudl of the University of California Los Angeles, US, agree that more work is needed before the system is ready for real applications. ’The vesicle membranes are too permeable to moisture and the shelf life, particularly in a humid environment, would be too low for immediate applications, particularly the anticorrosive application the authors have in mind,’ says Wudl.

Huang and Yang are currently optimising the material system by looking into the effect of microcapsule concentration and coating thickness on the damage healing kinetics. ’We expect the optimised system to show both damage healing smart features and a great improvement in long-term anticorrosion capability,’ says Yang.