Barnacle cement is strong stuff, as anyone who has ever laboured to chip barnacles off the hull of a boat will tell you. The sticky trickery has now been revealed by researchers at Okayama University’s Marine Biotechnology Institute in Japan. The researchers found that the saltiness of seawater triggers the creatures’ natural bond.

Kei Kamino and colleagues synthesised a peptide based on barnacle cement and showed how it formed a strong glue. ’This self-assembly is one of the indispensable functions of underwater attachment,’ they report. 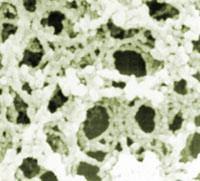 The peptide self-assembles into a waterproof mesh. This begins with the formation of disulfide bonds that act as bridges between residues in the peptide, holding it in a stable folded protein structure. Kamino’s team triggered the formation of these bonds by adding a solution of sodium chloride at a concentration close to that of seawater, which, in turn, activated a conformational change into the fibrous membrane that bonds the barnacle to its chosen surface.

James Callow from the University of Birmingham, UK told  Chemistry World  that natural biological adhesives can make valuable medical tools. ’These molecules can inform the formulation of surgical glues since they are able to bind to a wet surface,’ he said.

’Understanding of the molecular basis of how these adhesives work has, so far, been painfully slow,’ said Callow. ’This study has broken new ground and should inspire more rapid development of nanocomposites that mimic those found in nature.’