Simple catalyst speeds up the synthesis of a chiral protected building block used in complex syntheses.

Chemists have developed a simple catalyst that speeds up the synthesis of a chiral protected building block used in many complex syntheses.

Protection of sensitive functional groups and selective production of the desired enantiomer are two key features of the synthesis of many biologically active organic molecules. They are normally achieved in separate reaction steps, adding to the length and difficulty of the overall synthesis protocol. Now, Amir Hoveyda, Marc Snapper and colleagues at Boston College, US, have developed a small molecule catalyst that protects the alcohol group of its substrate in a highly stereoselective way, thus replacing five reaction steps with one.

The team designed a small group of candidate molecules, combining a Lewis base function with a part that can establish hydrogen bonds with the achiral diol reactant. In an initial screening, the researchers identified a dipeptide as a promising candidate, which they then improved by varying the constituent amino acids. The final result was an easy to prepare small molecule catalyst that produces yields of up to 96 per cent with an enantiomer ratio of 98:2. 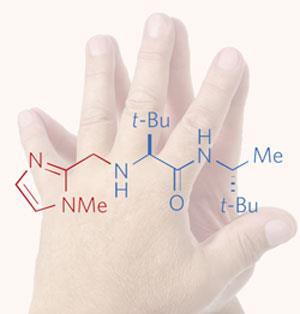 ’The new catalyst will allow, for the first time, chemists to carry out the most common form of alcohol protection, which is carried out in hundreds of laboratories in the world every day, while, at the same time, converting a symmetric molecule into one that is asymmetric or chiral,’ Hoveyda told Chemistry World. Apart from saving time and cost, the authors anticipate that their method will make syntheses ’greener’ because it reduces solvent waste.

Traditionally, new methods in chiral catalysis have been inspired by the example of natural enzymes, which are still the most efficient and and stereoselective catalysts known. But this chiral catalyst is remarkable, said Scott Denmark from the University of Illinois, ’because this transformation lacks any biological precedent.’

The authors have high hopes that their method will establish itself both in research laboratories and in industry. ’We are taking steps to make the catalyst widely available through commercial suppliers,’ said Marc Snapper, who led the work with Hoveyda.