Synthetic, self-pumping membranes could be use to generate energy in compartment-less fuel cells

US researchers have imitated the transport functions of biological membranes by incorporating tiny pumps into synthetic membranes. They say their ’self-pumping’ mimics could be used in compartment-less fuel cells.

In nature, the membranes that hold cells together contain channel proteins responsible for letting ions in and out. Some specialist channel proteins use adenosine triphosphate (ATP) - the main source of chemical energy in cells - to drive ions against the concentration gradient.

Henry Hess at Columbia University in New York and In-Kook Jun at the University of Florida have now designed a polycarbonate membrane with a built-in pump action that’s driven, like in nature, by chemical energy. Their synthetic version gets its energy not from ATP but from hydrogen peroxide.

’We’re not doing exactly what biological membranes do, but it’s the first time to my knowledge that you have a membrane that harvests its fuel from the solution and then converts it into mechanical work for pumping,’ says Hess. ’So this membrane pumps by itself - it doesn’t need a power supply from the outside.’ 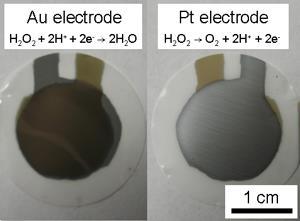 Hess and Jun sandwiched their membrane between gold and platinum electrodes. On the platinum side, hydrogen peroxide splits to form oxygen molecules, hydrogen ions and electrons. The electrons flow between the two electrodes, while the hydrogen ions are pumped through 1?m wide pores towards the gold electrode. Unlike in regular fuel cells, which use ion exchange membranes to keep the solutions surrounding cathode and anode from mixing, there is no need to create separate compartments. Instead, voltage is generated simply by immersing the electrode-coated membrane in hydrogen peroxide.

’The paper shows an inventive use of chemical versus external electrical power to sustain current through an electroosmotic pump. This makes it interesting and novel,’ says Juan Santiago, a microfluidics expert at Stanford University, California. ’Practically, though, the pump has low performance - I think it’s unlikely to be useful in fuel cells.’

The team is now working on getting the membranes to run on glucose, which would have the added advantage of making them biologically compatible, meaning they could eventually also be used in implants, for example to improve blood circulation.