Technology that can directly detect the chemical reaction as a single nucleotide adds to the end of a growing strand of DNA is about to slash the cost of genome sequencing, its inventors say. Jonathan Rothberg and his colleagues at Ion Torrent in Guildford, Connecticut, US, say that their direct detection technology will achieve the first $1000 sequencing of a human genome within the next two years. To demonstrate the potential of their technology, they have already used it to sequence a human genome - Intel Corporation founder Gordon Moore.

The selection of Moore as the first person to have their genome sequenced in this way is significant, says Rothberg. ’The chips that we made are a proof of principle that we could sequence on a semiconductor device.’ By tapping semiconductor technology for genome sequencing, Rothberg hopes to take advantage of Moore’s law, which states that chip performance at a particular price doubles every two years. 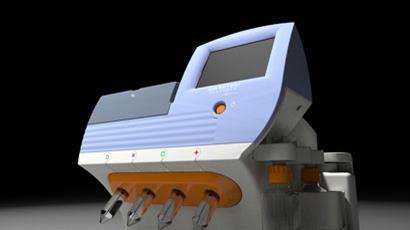 Ion Torrent’s chips are their key advance over previous genome sequencing technologies. To date, gene sequencers have all been based on optical detection. Single stranded DNA was converted into double stranded DNA by growing the second strand base by base, using labelled bases that could be detected by sophisticated optical detection systems to reveal the genetic sequence. The chip-based approach makes things much simpler - rather than relying on labelled reagents, it detects the pH rise as each nucleobase adds to the growing strand and releases a hydrogen ion in the process.

’The biggest challenge we had was the invention and development of a new kind of semiconductor chip,’ says Rothberg. ’We made a chip that, instead of seeing photons like the chip in a digital camera, sees chemistry. That had never been done before.’ 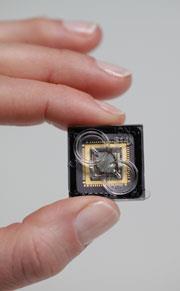 The chip can sequence DNA by following changes in pH

To turn that technology into a genome sequencing device, the team covered the chip surface with tiny wells. Into each well is dropped a polymer bead coated with single strands of sample DNA. The four nucleobases, cytosine, guanine, adenine and thymine, are then sequentially flowed across the chip. In any well where cytosine, say, is the next base in the growing strand, a hydrogen ion will be released, which the chip detects.

’When I heard about this work for the first time, that they are looking to sense single proton release, I thought it was just nuts,’ says Tim Albrecht, who is working on electronic genome sequencing technologies at Imperial College London, UK. ’It basically boils down to local pH changes, and the very small volume of the wells that they use on the chip surface. So it’s not that crazy when you do the numbers, and obviously it’s working.’

The Ion Torrent team have now shown that the technology works, and that it is scalable. The next step will be to deploy it on a chip with a much greater sensor density. The chips that the company has used so far have been based on 1998 semiconductor technology. ’In order to get to the $1000 genome, we have to build the same type of chip, but using a foundry from 2005,’ Albrecht says.

’I think this approach may well be the approach of the future,’ he adds. ’The only competitive technology that could match the performance is sequencing by tunnelling [of electrical current across the DNA strand], which is something that we work on, but that is still at a much earlier stage of development.’