A US researcher has shown how a so-called shape memory polymer - a material which can take on a temporary shape and then return to its permanent shape in response to an external stimulus - has the unusual ability to ’memorise’ a whole range of different shapes and can be prompted to change formation in response to finely tuned temperature triggers.

The work opens up the prospect of developing new smart polymers that can adopt a range of shapes depending on a given trigger.

Shape memory polymers can be programmed to hold a particular temporary conformation which reverts to a different, permanent shape when heat is applied. To do this the temporary shape is formed within a phase transition of the polymer - for example the glass transition where the molecules of the polymer change from a ’frozen’ glassy state to a more mobile ’rubbery’ state upon heating.

The vast majority of shape memory polymers can hold only one temporary shape within their memory because they have only one transition state.

Now, however, Tao Xie at the General Motors Research and Development Center in Michigan has shown that some polymers can be programmed to hold at least three temporary shapes, and possibly more, despite only having a single transition state. 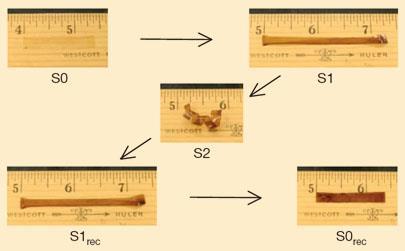 Xie investigated the shape memory of the commercially available polymer Nafion - a perfluorosulfonic acid ionomer used as a membrane in fuel cells. Nafion has a broad glass transition temperature, ranging from around 55?C to 130?C. By heating and stretching a strip of the polymer above its glass transition temperature, it retains a permanent shape. ’If you then cool it to say 90?C and apply a different force, such as bending, you can give it a temporary shape,’ says Xie. ’Cooling it further to 60?C and applying another force you can give it another [temporary] shape, and cooling it to 20?C you can programme a third shape.’ This process acts to ’programme’ the material, Xie explains, with different shapes associated with specific temperatures. ’All you need to do [then] is heat it up to 60?C and it resumes the shape you locked into it at that temperature, at 90?C it resumes another shape, and at 140?C the permanent shape is recovered.’

Because of the broad transition temperature range, many discrete shapes can be programmed into the polymer. And within this range, says Xie, any temperature can be chosen - making the system highly tunable.

Nafion itself is however a poor candidate for bulk processing. The hunt is now on, says Xie, for more processable polymers that have broad transition temperature ranges.

Andreas Lendlein, a shape memory polymer expert at the GKSS Research Centre in Teltow, Germany, says that Xie’s discovery of the ’favourable, versatile’ shape-memory properties of Nafion was ’surprising.’